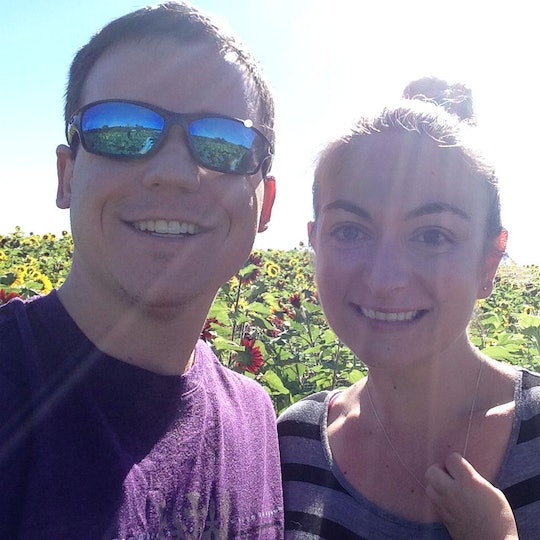 Actually, Having Twins Changed My Sex Life For The Better

When I found out that I was expecting twins instead of the one baby I'd planned on, I made certain assumptions about the way my life would change. I figured my stomach was about to become a road map of stretch marks as my body made room for two occupants instead of one, I knew budgeting for double the diapers was going to take some serious coin, and I assumed that I could say a tearful goodbye to my (up until then) enjoyable sex life. Because with twins to take care of, I figured I'd be way too busy, too tired, and possibly physically incapable of having frequent sex with my partner. And for the first 18 months or so after my boys were born, my predictions about sex after twins were pretty accurate. I ended up having a c-section rather then a vaginal delivery, so with the exception of some serious dryness issues, sex felt the same as it did in the days before babies. But still, we weren't having that much of it.

It's not that we didn't want to do it, it's just that by the time the babies went to bed at night, the idea of sleep turned me on so much more than the though of getting some. Plus, our boys did a lot of co-sleeping in those early days, so even if I was feeling up for ride on my personal manny-go-round, it was usually a no go. But even in those early months when we weren't getting it on on the reg, the times that we did manage to have sex without falling asleep were actually pretty hot. It took some planning to have sex when the boys were infants: We'd have to make sure they were asleep in their rooms and set the monitor up so we could hear it if they cried, and I had to make the time to shave my legs.

While scheduling sex seems like the least sexy thing ever, having to think about it, plan for it, figure out how we were going to pull it off made it feel like we were doing something naughty, something we shouldn't be. Add to that the fact that we were trying not to make too much noise so we didn't wake the babies sleeping down the hall, and the whole affair wasn't just perfunctory sex with my partner because we hadn't done it in almost a month — it felt like we were teens again, sneaking around having sex without trying to get caught. I didn't feel like a mom having "boring mom sex" like I'd worried I'd have. Instead, I was a vixen with a secret. It was a mega turn on.

I look at myself naked and I'm proud of the fact that this body carried two babies.

Like so many ladies (and men) out there, I've always had issues feeling confident and comfortable with my body. No matter how much my partner told me that he loved my body and would always find me attractive no matter how I looked, I was already a little apprehensive about seeing the major changes my body would go through with a singleton pregnancy. When I found out I was having twins, I gave up hope on ever looking at my stomach in the mirror without crying ever again.

Being comfortable in my skin during sex was something I struggled with in my pre-baby days, and I was positive that the issue would only get worse once my babies turned my abdomen into a double-wide trailer for a few months. Forget turning the lights off, I felt like the only way I was going to have sex after having twins was while wearing that rubber body suit from American Horror Story. Not because I'm into kink, but because black is slimming and also, it looked like it had Spanx-like tummy-controlling properties.

But I'm more confident than ever about my body since giving birth to my sons three years ago. I don't know if it's because my stomach is not the pile of shredded pastrami I feared it would be (thanks to my obsessive use of tummy butter while pregnant), or if I just found some self-confidence in the bottom of my diaper bag. I still have my hang ups and the days where nothing, not even my trusted leggings, feel comfortable. But in general, I look at myself naked and I'm proud of the fact that this body carried two babies. Getting through the ordeal of having twins and a c-section and seeing what my body was capable of, made me appreciate it in a different way. It actually kind of felt absolutely impossible not to see myself as sexy now, after giving birth. Instead of standing in front of the mirror after a shower and criticizing the way I look, I'm more likely than ever before to put on some music and jam out to "Closer" in a way that makes my partner put down his iPad and pay attention to me.

We may not be having sex as often as we did before we became parents, but because our kids are twins we have more sex than a lot of other parents I know.

Having twins has made our sex life better because I'm more outgoing between the sheets and less concerned about my partner seeing me at an unflattering angle. In the delivery room, my partner saw my body do lots of things, none of them sexy. He watched me try and push for three long hours and was by my side for my c-section. There are sounds and smells that happened in that room that we will never speak of again. But I know that if he can still get excited by the sight of me naked after all that, having some cellulite on the back of my thighs is nothing to get worked up about. He's seen far worse and is still here.

But the best part about having twins when it comes to my sex life is that I had two babies at the same time. My sons are 3 now, and while most of my friends are getting pregnant with or having their second child, I'm done with that stage of life. The sleep deprivation that comes with a newborn is brutal, but my partner and I got it out of the way in a single, extra crappy dose. Instead of having to start all over again with a new baby and reset our sex clock to zero, we got up a little more often than we would have with one baby the first time around, and now we're past that stage. I didn't realize how great this was for our sex life at the time, but I do now. It's hard not to be smug as my friends talk about how long it's been since they've been laid because of the new baby at home since our boys have been sleeping through the night for years now. We may not be having sex as often as we did before we became parents, but because our kids are twins we have more sex than a lot of other parents I know.

Having twins is also nice on the rare occasion that one of the boys wakes up while my partner and I are in the middle of an early morning adults-only endeavor. If we're canoodling between the sheets and we hear the kids waking up, we know we have at least five minutes of time where they'll at least play together nicely before forming their beds into a giant slide or something else that will end in a trip to the ER, so we can at least try to finish what we're doing instead of having to rush straight into their room. Sure, you can leave an only child up to their own devices, but I like that they have a playmate to keep them company while mommy and daddy play too.

I won't say things in the sex department are back to how they were before we had twins. Having twins is still tiring, and sometimes the day gets away from us and, "We should really do it," turns into us passing out during House Hunters. But having twins wasn't the death knell to my sex life that I thought it would be. Actually, I think our sex life is more satisfying now, even if it's not quite as frequent as it once was.