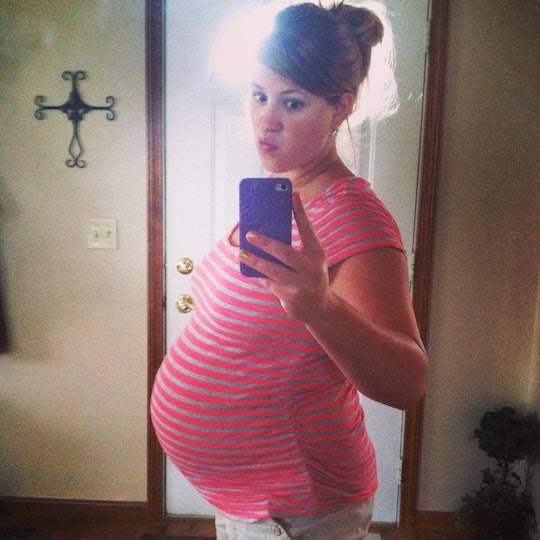 I know I'm not alone in this, but my deep, dark secret is that I don't really like being pregnant. But let's just get one thing out of the way right up front: Not enjoying the physical process of being pregnant is not to be confused with not appreciating the ability to be pregnant. I'm thankful for the privilege of getting pregnant, grateful for my children and for the fact that I don't know the pain of infertility. I'm sensitive to the fact that every woman walks a different road to grow her family and it's because of that knowledge that I feel comfortable to even talk about this. Because every woman does have a different experience with pregnancy. And even though I didn't struggle to get pregnant, I still didn't love being pregnant. At all.

I got pregnant at 21 and aside from some vicious morning sickness that caused me pretty much barf non-stop for 15 weeks, I felt physically fine. There are a few advantages to getting pregnant in college, at least when it comes to the fact that young bodies handle being pregnant pretty well. I gained about 30 pounds and "bounced back" relatively quickly, despite a few postpartum complications. We started trying for our second baby when our daughter was 15 months old, and I got pregnant right away.

I felt shocked that it happened so quickly, but adjusted pretty easily, especially because this pregnancy was planned and I knew, even before I took the test, that this baby would be a girl, so I looked forward to being the mother of two sisters close in age. My second pregnancy was by far my easiest. I felt great, experienced no morning sickness, and physically, I felt fine. We bought a house when I was about 20 weeks and I had no trouble packing, painting, and hauling boxes and a toddler back and forth between our apartment and our new home. I was home alone with my 2 year old when I went into labor and somehow still managed to get us both bathed, the house cleaned, and her safely deposited to her grandparents' house all before my husband even came home from work. But all that changed pretty soon after.

I'd heard so many women gush about how pregnancy made them feel beautiful and energetic and "glowing," but all I felt was sweaty and gross and like a total failure for not appreciating the magic my body was capable of.

My feet swelled up to sizes I didn't know were humanly possible, my belly stretched to epic proportions, and every single part of my body hurt whenever I tried to breathe. One my hips started to pop out at random and walking caused excruciating pain. I was so miserable and the heat felt unbearable. Even wearing pajamas was uncomfortable, so you can guess how many times I horrified my family members who walked in on me in the middle of the night trying to sleep (although getting comfortable enough to actually fall asleep was virtually impossible).

After my son was born during the first week of July, I was pretty much sick with mastitis all summer long. I vowed that it was time to give my body a break from pregnancy until I felt strong enough to handle it all over again. I vowed that if I did this again, I was going to have a "fit pregnancy." I promised myself I'd eat healthier and exercise and feel strong the next time around so that I could avoid feeling physically uncomfortable. I'd heard so many women gush about how pregnancy made them feel beautiful and energetic and "glowing," but all I felt was sweaty and gross and like a total failure for not appreciating the magic my body was capable of.

By the time I was pregnant for the fourth time, every single day felt like a struggle. I got pregnant a little sooner than I'd wanted to and I struggled a lot mentally with the pregnancy from the very beginning. I didn't feel ready to be pregnant again, which made me feel guilty, which made me feel physically worse, which made me despise being pregnant even more, which made me feel even more guilty, and round and round I went. I felt so sick and constantly ate throughout the day to keep that nauseous feeling at bay. My in-laws had planned this huge trip to Mexico for their kids and respective spouses that I'd been looking forward to but by the time we went I was about six weeks pregnant and spent the whole time sick, sunburned, and miserable.

Despite my best efforts for a healthy and "fit" pregnancy, I ballooned up to the point where people literally started asking me if I was due soon. What they didn't know was that I was only six months along. I eventually was diagnosed with polyhydramnios, which is excessive amniotic fluid according to the Mayo Clinic, but my doctor couldn't find a reason to exactly why I had it. I was thankful that nothing was wrong with the baby (a birth defect in baby's gastrointestinal tract or central nervous system can cause the condition, according to the Mayo Clinic) and that I didn't have gestational diabetes, but it felt impossible to survive pregnancy when I was measuring full-term at only 30 weeks along. Knowing I still had 10 weeks to go and a belly that was already the size of someone about to give birth made me want to weep with despair.

I literally had to give myself a pep talk each and every day just to roll over in bed. I felt like a complete failure that my belly was so huge, like I was doing something wrong. I felt out of control in every possible way. I was in so much pain, there was no position that was even remotely comfortable, and everything was a struggle: breathing, moving, bending over. The daily tasks of trying to work and take care of my three other kids made me want to cry. I was so exhausted, both physically and mentally, and on top of it all, I was worried that something was wrong with my baby that was causing this too, even though all the testing came back fine. I wanted so much to feel that magic of pregnancy that so many other women had talked about, but all I felt was scared, miserable, and ungrateful.

Because I had polyhydramnios, I was at risk of premature birth, placental abruption, and umbilical cord prolapse, which meant that my umbilical cord could drop before the baby and potentially cause a life-threatening situation, still birth, and heavy bleeding after delivery, according to the Mayo Clinic. Knowing the risks, we induced.

There was so much fluid in my belly that my baby was breech past 35 weeks, which is when most babies turn head-down and get ready to go in the position they need to come out through the birth canal. I was terrified that I was going to need a c-section and I did everything I could think of to try to get the baby to turn. I laid on my stairs upside down, I spent hours in the pool at my mom's house doing handstands and somersaults until I was dizzy, I visited the chiropractor's office and rubbed peppermint oil on my stomach in an effort to get the baby to squirm enough to flip. But nothing worked.

It was finally over.

She remained stubborn and my belly continued to grow, increasing in fluid in the last trimester, giving her even more room to swim around in there and increasing the chances that she would never stay head down. I had a check-up on a Friday and she was still floating merrily away in the breach position, so my doctor told me to prepare myself for a c-section. But somehow, by Monday, she'd finally flipped and the doctor decided to waste no time. We decided to induce right away to avoid her turning again and me needing a C-section or even worse. Because I had polyhydramnios, I was at risk of premature birth, placental abruption, and umbilical cord prolapse, which meant that my umbilical cord could drop before the baby and potentially cause a life-threatening situation, still birth, and heavy bleeding after delivery, according to the Mayo Clinic. Knowing the risks, we induced.

And the moment I gave birth to my daughter, I felt relief like I had never known before. Relief that she was healthy (she weighed 8 pounds, 6 ounces even though she was three weeks early), relief that nothing was wrong, relief that the induction I was so scared of had gone well, relief that I didn't have to have a c-section and try to recover with four kids at home, relief that I'd been stronger than I thought possible, and relief, sweet blessed relief, that it was finally over.

Of course, in the end, my pregnancy was absolutely worth it and it always is, but that last pregnancy has left me fearful of ever being pregnant again. Truth to be told, I'd love to have just one more baby, but I'm terrified of reliving this pregnancy experience again. I wish so badly that I was one of those women who love being pregnant and have joyful, wonderful pregnancies, but obviously, that wasn't in the cards for me. There are a lot of reasons I have to be thankful about my journey to motherhood and I say a prayer of thanks every day for the family we were able to have. I'm just not sure I'd ever want to be pregnant again.