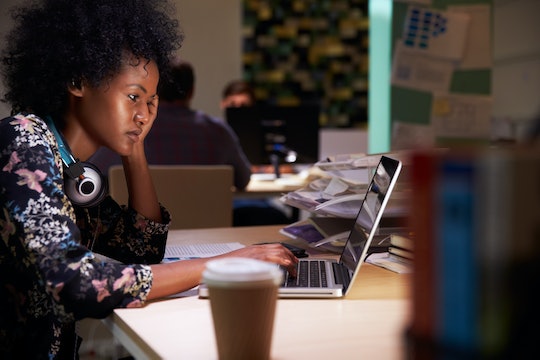 For the past few weeks I attended a non-mandatory training for work. While I didn't have to complete this training, it did count towards the continuing education credits I need. For two Tuesdays, two weeks in a row, I did not come home until around 8:00 in the evening. I'm sure some parents would be upset about not putting their kids to bed every night, but sometimes I low-key love staying late at work. Sure, throw your pitchforks my way, but I can't deny, and I won't deny, that sometimes the only break I get is the one afforded to me when I have to stay at work a few hours longer than normal. I'm sure I should pretend it's a huge convenience, but as a mom who works outside the home, honestly, I don't have the energy to perform some sort of lamentation. Not going to happen.

Now, I used to very much dislike staying late at work, and for the most part it's not a working arrangement I actively seek out or particularly enjoy. For the most part, all I want to do at the end of a normal work day is come home, change out of my usually-uncomfortable work clothes, throw on some sweats, and binge on some show. (Although, I think binging didn't really exist back before Netflix, but I'm pretty sure watching marathons of Law and Order: SVU would still be considered binging.) I'd lie on the couch, watch my shows, and eat some snacks without a care in the world. Now, well, that world no longer exists.

Now, when I get home there is no relaxing for me. Now, when I get home, I still get to change out of my work clothes, but I no longer get to just lie on the couch, rotting my brain on some Friends reruns and forgetting about that annoying thing called "responsibility." Now, I have to tend to the needs of my children, who are either cranky and tired, or way too hyper to leave me alone for even five minutes at a time. I have to make dinner, remind two little humans to eat their dinner, negotiate with the little humans about how much dinner they should eat, separate the two little humans while they are fighting over dinner, and then argue with them over cleaning up after dinner and before bed. Then I have to bathe them, read to them, struggle over bedtime, and quench their sudden insatiable thirst, at least three times, before they decide they're ready to go to sleep.

I want to miss the overwhelming and exhausting post-work, pre-bedtime routine.

By the time all of that is over, all I have strength for is, well, walking to the bedroom and putting a blanket over my head.

So yes, sometimes I just want to stay at work a little longer. I want to miss the overwhelming and exhausting post-work, pre-bedtime routine. I want to just get some work done and be productive for a little longer, and without the constant interruption of two children who can't help but consider themselves the center of the universe. Sure, going out with my friends would work just as well, but when I'm staying late at work I don't feel as much guilt because I'm technically not out having fun. I'm working.

I get that I'll probably miss all of this struggle, all of this back-and-forth, and every little bit of this exhausting routine once they are older and no longer need me to quench their thirst, or to read them a story, or to tuck them in at night.

Listen, I know my kids won't stay this age forever. I realize I should cherish my every moment with them. I get that I'll probably miss all of this struggle, all of this back-and-forth, and every little bit of this exhausting routine once they are older and no longer need me to quench their thirst, or to read them a story, or to tuck them in at night. I understand all of this perfectly well. But, unfortunately, that understanding doesn't matter when I'm exhausted after coming home from work. That understanding is futile when all I want to do is come home and just lie down without being bothered for one evening. That understanding is useless when I just need a break.

I low-key like staying late at work because between my job and my family, staying late and finishing up some work is the only "real" break I get. And all of us can use a break, you guys.