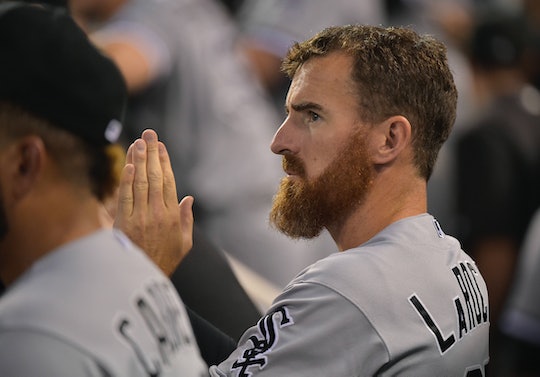 This week, in a move that surprised many people, Chicago White Sox first baseman Adam LaRoche abruptly announced his retirement, with $13 million left on his contract. He promised further explanation later in the week and yesterday, that explanation came. He chose to retire after team vice president Ken Williams requested that he bring his son to work a little bit less frequently. Apparently LaRoche had been bringing his 14-year-old son Drake to the clubhouse on too much of a regular basis. He even referred to him as the team’s “26 man” in a Chicago Tribune article. Vice president Williams explained his decision thusly: “We all think his kid is a great young man. I just felt it should not be every day [that he comes to the clubhouse], that's all. You tell me, where in this country can you bring your child to work every day?”

And hey, White Sox fans may not be too disappointed to lose the poorly-performing and oft-injured Laroche before this season begins, as he was more of a liability than an asset last season. And sure, Williams has a point that there’s virtually nowhere that will allow a parent to bring their kid to work every day. His request isn’t entirely unreasonable. But in professional sports culture, which is awash in toxic masculinity, it’s refreshing to see a player make a decision to stand up for what his family needs, and to put parenting first. In fact, I'd argue that it's a radical statement for a man to say that his kid is more important than his professional baseball career.

Just two seasons ago, in 2014, New York Mets player Daniel Murphy missed the first two games of the season to be with his wife and newborn child, only to be criticized for the decision, with many people feeling like taking the second game was "excessive." Anyone who has ever had a child knows that not only is two days not even remotely excessive, it's not really any time at all. Even though fathers aren't the people giving birth, being in the support role is imperative for both mom and baby. My husband went back to work two weeks after I gave birth to my daughter and I wasn't at all ready for him to leave. It was overwhelming to think that I had to care for a newborn on own, even though I had my mother to help.

What the MLB needs is the men in the clubhouses and on the field to step up and use the power that they have — their talent and their contracts — to change the way we talk about what it means to be a professional athlete and a “real man.”

Amid the message that sports must come before everything else, that athletes are super humans who must push through everything — family obligations, injuries, sickness — to be on the field, it’s shocking to see a player say, “Actually, no.” And it sounds like his teammates had his back, considering a boycott of a spring training game to support LaRoche. Washington Nationals star (and former teammate of LaRoche) Bryce Harper tweeted his explicit support for LaRoche’s decision, as well.

When my husband and I decided that we were going to have children together, it was something we took on as a team. My husband is more than just a sperm donor; he's an equal parent. And if men like Adam LaRoche are willing to take that role, we should be applauding them, not discouraging or punishing them.

Even though the boycott didn’t happen, the support of these other players is important. Dismantling the toxic masculinity of sports culture can’t happen without the players on the inside doing some of the hard work themselves. As a woman and a baseball fan, I can rant all I want about the damaging messages that sports culture sends to young men and boys about what it means to be a man, but I’m unlikely to affect much change outside of my own home and my own family.

What the MLB needs is the men in the clubhouses and on the field to step up and use the power that they have — their talent and their contracts — to change the way we talk about what it means to be a professional athlete and a “real man.” Because (some) “real men” may play ball, but they also make it a priority to be a present and engaged father, too, and that shouldn't come as a detriment to their career paths. It doesn’t make you tougher or more admirable to put your career above everything else, including your family, though many men receive the message that it does — whether they’re professional athletes or work in a corporate office.

It's why paid parental leave is an issue that affects everyone, not just the people who give birth. Even though not every family has two parents, for families that do, it matters a whole lot for both of them to be active, engaged, and present. When my husband and I decided that we were going to have children together, it was something we took on as a team. My husband is more than just a sperm donor; he's an equal parent. And if men like Adam LaRoche are willing to take that role, we should be applauding them, not discouraging or punishing them.

The message that men are the breadwinners while women are the ones who make sacrifices to stay home with their kids is archaic and damaging. And although not every man will be in the position to walk away from (an admittedly high-paying) career to spend time with their family like LaRoche is, his decision can still teach men about what being a father can look like in the modern age.

I’d like to see more players making sacrifices or standing their ground when it comes to putting the needs of their children and family first, whether it’s taking two days (or more!) off to be with their new baby or walking away if they need to. Baseball is just a game, but parenting is not. Kids will always matter more than batting averages and stolen bases. So thank you, Adam LaRoche, for changing the narrative about what being a professional athlete and father can look like. Enjoy the time with your son, and congrats on your retirement. More than anything, congrats on being the type of parent who puts his family where he feels it belongs: first.