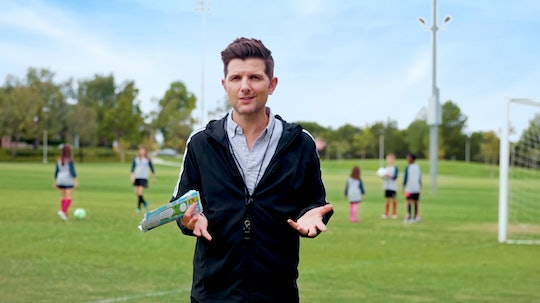 On the now-classic TV comedy Parks & Recreation, it was Leslie Knope (Amy Poehler) who fought so tirelessly to preserve the parks in her town. But in real life, it's another Parks & Rec alum who's working to make sure kids have safe places to play: Adam Scott, who joined Stonyfield Organic's #PlayFree initiative to address the issue of dangerous chemicals being used on public parks and fields where 26 million kids across the country spend their time playing.

Launched as Stonyfield celebrates its 35th year in business, #PlayFree is reaching out to 35 communities nationwide and have already partnered with 10 of those communities to convert public fields and parks to organic grounds management, which will keep fields and community spaces free of toxic pesticides and other harmful chemicals.

Like so many parents, Scott had no idea there were dangerous chemicals being sprayed on parks everywhere, every day. That's why he agreed to star in "The Ridiculous New Rules of Soccer," a short, hilarious video that introduces parents to the problem in a way that's super relatable.

"With each new outlandish work-around to the traditional game of soccer, we're really trying to point out how crazy it is that a majority of our parks and public fields are being sprayed every day with a chemical cocktail of harmful persistent pesticides," Stonyfield co-founder and Chief Organic Optimist Gary Hirshberg said in a press release.

"Instead of rewriting the rules of our kids' games, the #Playfree initiative is all about helping communities rewrite their approach to grounds management. Organic grounds management is very much a viable solution that will let our kids run, frolic and play free from worry. Just like organic food and organic agriculture, organic fields are a win-win."

(Okay, raise your hand if you kind of wish Adam Scott would star in a series about a beleaguered suburban soccer coach.)

It's clear from Scott's performance that his concern is genuine, which isn't a huge surprise considering The Good Place actor has two kids himself. He also has a rather full plate these days, from his role on the Twilight Zone reboot to the upcoming second season of Big Little Lies (counting down the days over here!). Still, when Romper reached out to Scott with a few questions about how he got involved in the #PlayFree initiative, he was gracious enough to answer.

Romper: When did you first learn about the chemicals being sprayed on parks where kids play? And what was your first reaction?

Adam Scott: I actually wasn’t even aware of the issue until Stonyfield Organic yogurt approached me to help get the word out about their #PlayFree initiative. I was shocked to hear some of the statistics — over 26 million kids play outside on public grounds and so many of these fields are managed using a chemical cocktail of herbicides, insecticides, and fungicides. I’m a parent to two myself, and when I heard what was happening it immediately became clear to me that I wanted to lend my voice and do what I can to help make other parents aware, too.

Since finding out about how harmful these chemicals can be to kids, have you made any adjustments to your own parenting? (As a mother of three myself, the part in the video where you tell the kids not to touch their faces was so hilarious to me!)

Ha! It was funny, but it’s true! My eyes are definitely more open. I pay closer attention to what my kids may come in contact with and I’m doing what I can to stay educated. Even small things like being sure everyone takes off their shoes when they come in the house so they don’t track pesticide residues in, make a difference. I think a really great starting point is to contact your local Public Works or Parks and Recreation Department and ask what their policy is on pesticide use — you can even ask for the full spray report to see exactly where, what and how much they’re spraying.

Do you have any advice for parents who are just learning about the dangers of pesticides and other chemicals about how they can reduce their children's exposure, just in the course of daily life?

As I tell other parents — you can make a difference starting right in your own backyard. First, switch your own yard care to organic maintenance. Stonyfield Organic has a lot of great resources on their website that parents can look to as a starting point. If you’re looking to take it a step further, groups such as Non Toxic Neighborhoods are positively impacting communities across the country — and they started as just a group of concerned parents who decided it was time to make a difference.