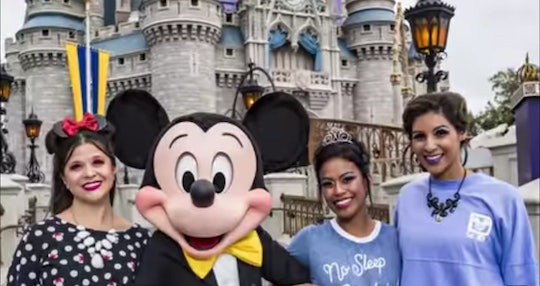 Walt Disney World might be a magical dream land where young children's fairytale dreams can come to life, but now, those of us who have never quite outgrown our own glass-slipper, happily-ever-after fantasies, finally have the option be transformed into princesses for the day. Though the Bibbidi Bobbidi Boutique at Cinderella's castle has been offering Disney makeovers for children for over a decade, the new "Character Couture" packages at the Grand Floridian's Ivy Trellis Salon mean that adults can now get Disney princess makeovers at Walt Disney World too.

So what exactly is involved in a Character Couture makeover? According to the Disney Parks blog, the stylists at the salon — who already offer standard services like haircuts and blow-outs — will "transform your hair, makeup and nails into designs inspired by our classic characters." And it's not actually just limited to princesses: options also include villains (like The Little Mermaid's Ursula), "galactic" and "hero/heroine" styles, or the "fab five," including Mickey and Minnie Mouse. There are three makeover package option depending on how in-depth you want the transformation to be, and pricing begins at $50. But those looking for the full Disney treatment will likely want to opt for the $120 "Timeless Transformation" package, which includes a "classic character-inspired hairstyle, makeup and nails."

The idea for the adult-focused amenity came both from the popularity of the Bibbidi Bobbidi Boutique, as well as the rise of "Disneybounding," where adult guests visit the park in their own DIY Disney-inspired outfits. As Joseph Motowidlak, guest experiences manager at Walt Disney World's Senses Spa, explained to TODAY:

We saw that our guests were coming up with outfits and entire ensembles inspired by Disney characters. We really saw a need for some kind of transformative makeover experience for people of all ages — something customized to allow guests to really enjoy their day on our property.

The packages were first offered as a one-off, tied to the seasonal event "Mickey's Not-So-Scary Halloween Party," according to Motowidlak, but they're now offered to all guests year-round. And unsurprisingly, the service has already become super popular: Motowidlak said he recommends that guests book their appointments at least two weeks in advance. But for those unable to get the official Disney makeover treatment, Disneybounding offers plenty of do-it-yourself inspiration.

Though adults aren't actually allowed to simply show up to a Disney park dressed as their favorite character (it's against the rules, according to People, to ensure that young guests don't get confused), Disneybounding offers a way for grown-ups to show off their Disney-inspired looks, and the results are often really impressive. And some celebs have even jumped upon the Disneybounding trend: not only did actor John Stamos propose to his wife, Caitlin McHugh, at Walt Disney World, the two regularly visit the park in their Disneybound best.

In fact, in May 2017, McHugh showed off her Disneybounding prowess in a photo shoot shared with Disney Style, in which she managed to turn a single yellow dress into ten separate Disney-inspired looks (one of which was even styled after the signature Disney dessert, the Dole whip):

Unfortunately, even the full Character Couture treatment isn't nearly as cool as the kid-only experience of getting a full fairy godmother-led Bibbidi Bobbidi Boutique makeover (something that North West and Penelope Disick took full advantage of while visiting the park back in 2016 with their moms, Kim and Kourtney Kardashian). But it's still a seriously fun — and super memorable — way to make the most of your Disney vacation. In fact, it seems like the only real challenge might simply be figuring out which character you'll actually want to be.