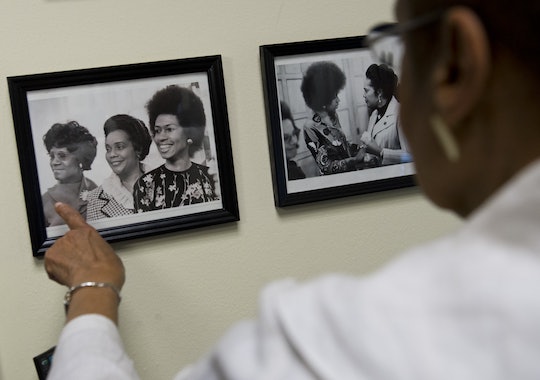 After The Election, I'm Focusing On The Women Who Truly Did Make America Great

When President-elect Donald Trump and his supporters say they want to “Make America Great Again,” it’s pretty much impossible for anyone with an understanding of history not to be alarmed. Though America is, on paper, founded on important ideals of freedom and liberty, that has never been the lived-out reality for all Americans. Everything that has ever been great in American history has been the result of efforts of determined people taking action to resist genocide, slavery, internment, discrimination, segregation, and other forms of violence and oppression. Yet in his calls to build walls to keep out immigrants, ban entire religious groups from our country, close our doors to refugees fleeing violence, incite violence against peaceful protesters, and more, Trump and his allies have helped to re-normalize the kind of bigotry generations of activists have worked and even sacrificed their lives to undo.

In light of the presidential election result, many of us and our children are frustrated, sad, and afraid, wondering how we will protect ourselves, our kids, and their future from our own fellow citizens, who either explicitly support bigotry, or are willing to ignore it as long as they think they personally can get what they want from the rest of American society. I’m ashamed and heartbroken by the short-sightedness and failures of empathy among many in our society, who led us to this. This election was about racism. This election was about sexism. This election was about xenophobia, Islamophobia, and anti-Semitism. These are facts we can't wish away, as much as some (particularly those who voted for Trump but don't think of themselves as bad people) may want to.

As parents of conscience and compassion, we have no choice but to be great like so many others who’ve come before us, struggling against all kinds of violence and exclusion to make sure that “freedom and justice for all” can someday be more than just words.

I'm mourning that today, and will continue to grieve as much as I need to because there is no conflict between tears and strength. But I know for my own and my family’s sake, that all of us who are committed to raising strong, compassionate children need to find ways to channel our grief into action so we can defend our safety and humanity, and keep our place in this country. Because while America has never been universally “great,” there is indeed much greatness in us, and in the people whose sacrifices even made it possible for so many of us to believe that hatred and oppression might soon be things of the past.

We’ll be great like Harriet Tubman, who not only freed herself and hundreds of others from enslavement, but also spied for the Union army during the Civil War, becoming the first American woman of any color to lead an armed expedition in wartime. (And in the meantime, I’m going to cheer myself up by watching this hilariously inappropriate episode of Drunk History over and over after my son goes to bed, because it’s easily the funniest telling of her inspiring story.)

We’ll be great like Sojourner Truth, another abolitionist, who spent four decades of her life preaching for human rights, and who also recruited enslaved people to fight for the Union army, despite not being able to read or write. (That former slaves like her, Harriet Tubman, and countless others were able to accomplish what they did in a time when it was literally illegal to teach Black people to read, astounds and inspires me to do even more with my elite education.)

We’ll be great like Elizabeth Piper Ensley — and countless other black suffragettes — whose organizing, fundraising, and citizen lobbying efforts led Colorado’s once exclusively male voters to support voting rights for Colorado women back in 1893. Their efforts contributed more broadly to the national movement that won the 19th Amendment in 1919, securing women’s constitutional right to vote — on paper, at least.

We’ll be great like Fannie Lou Hamer, among the many Civil Rights activists of the 1950s and 1960s who endured beatings and worse for challenging discrimination and violence that stopped both men and women of color from actually exercising the right to vote until their activism led to passage of the Voting Rights Act of 1965. Hamer in particular was a consummate badass, who often sang to strengthen herself and her allies while organizing high-impact efforts like the Mississippi Freedom Democratic Party to challenge black disenfranchisement. (Her example is especially useful in light of recent challenges to the Voting Rights Act, and a growing willingness for armed people to intimidate others at the polls.)

We’ll do it because we want better than this for our kids, and we’re not planning to forfeit our country to those who feel America was somehow greater when most of us were forcefully kept from enjoying everything it has to offer.

And we’ll be great like Daisy Bates, the reporter and former president of the Arkansas NAACP who found and supported the Little Rock Nine to integrate Central High School, despite death threats and multiple acts of vandalism intended to intimidate her in her own home. We'll be great like Pauli Murray, the black queer legal scholar whose work formed the backbone of the legal strategies used to win a generation of civil rights victories in the courts, and who helped found the National Organization for Women (NOW). We'll be great like Shirley Chisholm, “unbought and unbossed,” who was the first black woman to be elected to Congress and the first black person and woman to seek the presidential nomination of a major party. We'll be great like Dorothy Height, a social worker and civil rights activist from the 1930s until her death in 2010, who helped found the National Women’s Political Caucus alongside leaders like Shirley Chisholm, Betty Friedan, and Gloria Steinem.

As parents of conscience and compassion, we have no choice but to be great like so many others who’ve come before us, struggling against all kinds of violence and exclusion to make sure that “freedom and justice for all” can someday be more than just words. We’ll do it because we want better than this for our kids, and we’re not planning to forfeit our country to those who feel America was somehow greater when most of us were forcefully kept from enjoying everything it has to offer.