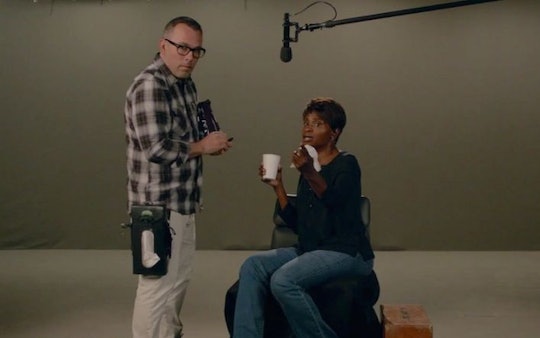 Season 6 of American Horror Story has quickly changed the game of the series in just three legitimately scary episodes. Not only has the very real horror aspect of the show returned, but the whole format was switched up when we were made aware of the fact that what we're watching is a documentary TV ghost show within a show. Other than the many theories circulating about the Lost Colony, there are plenty of AHS: Roanoke crew theories about the crew members behind the cameras in the faux documentary, My Roanoke Nightmare.

It hasn't been hard to get used to the format of this new AHS season, but in Episode 3, they did something else that's new for this particular season. They broke the fourth wall (in a way) and stopped one of the interviews they were performing as they retold the story of the family's haunting. In that moment, we saw and heard several different things. We saw Lee, emotional, as she explained what happened with Cricket Marlow, the medium. Then, we heard a voice from behind the camera ask about what he'd said to her about her first-born, Emily, and about going to see him the next day.

Lee demanded to know how the crew knew about Emily and the voice calmly explained that everyone they interview undergoes background checks. It's then that Lee demands they turn off the cameras and they seem to for just a few minutes before cutting back to her interview.

But it's that moment of seeing part of the fake behind the scenes stuff of My Roanoke Nightmare that sparked so many questions about the AHS: Roanoke crew and how there is obviously so much more to them than we even know yet.

The Camera Crew Is Part Of A Cult

One possible AHS: Roanoke crew theory is that the crew members are actually part of a cult, interviewing Matt, Shelby, and Lee as part of their research into the Lost Colony to get information to perform rituals on the land themselves. Lee points out that the red light is still on when they supposedly turned off the cameras to give her a break, and that could have just been a selfish camera crew sneaking more footage, or someone on the Roanoke cult trying to get as much information as he could for whatever bigger purpose they might have.

They Aren't Who They Say They Are

This doesn't necessarily have to mean that the crew for My Roanoke Nightmare is actually a cult, but that they are part of something else that is equally as harmful and sinister. They might be linked to that hillbilly family we met in the first episode, who clearly didn't want Matt and Shelby to move into the farmhouse, or part of an organization that doesn't want too much information about the haunting actually released to the public. Either way, the AHS: Roanoke crew might not be a legit crew at all.

The Interviews Are Going To Be Used For Something Else

The interviews are a huge part of the documentary within AHS this season, but as viewers, we might only be seeing a small part of what is going on. It is entirely possible that the interviews of Lee, Shelby, and Matt are being recorded to be used for something else besides a ghost haunting TV show.

Evan Peters Is Part Of The Crew Behind My Roanoke Nightmare

When Lee gets distraught and demands that the cameras be turned off, the voice that had spoken to her beyond the camera sounds very familiar. A lot of fans have speculated that it was Evan Peters, since he's been credited for every episode of the season so far and it did sound very much like the longtime AHS cast member, but we have yet to see any legit appearance.

They Hired Actors To Interview As Matt And Shelby

This AHS: Roanoke crew theory is probably the juiciest one yet. What we're seeing right now is another version of Matt, Shelby, and Lee each tell their story about what happened at the farmhouse, but Ryan Murphy has said that halfway through the season we're going to get another game changer. So what if we find out that the crew actually hired actors to play Matt, Shelby, and Lee and the real versions of them are being held somewhere or they actually died on the land?

Cheyenne Jackson Is Part Of The Documentary

This goes back to the question of who the voice is behind the camera, talking to Lee. It's still hard to figure out just who it is speaking to her, but some believe that Jackson is the voice and that we'll see him revealed soon. Still, if that's the case, then who is Peters on AHS: Roanoke? Because we still haven't seen him yet either.

There are likely going to be a lot more questions about AHS: Roanoke and the crew members behind the documentary within the show, but with all that's already happened in three episodes, there could very well be something more to the crew than any of them are letting on.