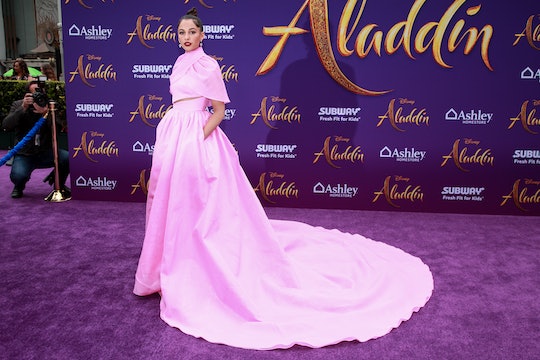 Aladdin' Actress Naomi Scott Is Like A Princess IRL

When I was a little girl I was very obsessed with Cinderella. She was everything I wanted to be at the time: beautiful, patient, kind, and a good singer who had a way with the animals (a fleet of mice who wore hats and used their nimble fingers for sewing). If I ever met her in real life I would have melted into the ground in a pool of hysterical tears. Apparently the youth of today are a bit more together than that. When Aladdin actress Naomi Scott surprised aspiring princesses at the movies, they were clearly over the moon to meet the real Princess Jasmine. But they also kept their cool, so I'm super impressed.

Disney's live-action version of Aladdin, starring Naomi Scott as Princess Jasmine, Will Smith as the Genie, and Mena Massoud as the title character, opened across the country on Friday. Obviously fans big and small were lining up to see this updated version of the 1992 cartoon classic, perhaps especially to see a new Disney princess in action. The reviews are in and already people are praising Scott, who some young fans might recognize as Pink Ranger from the 2017 Power Rangers Movie, for her role as the fiery Princess Jasmine, as per Polygon. But here's the thing: Little kids don't care about reviews, they care about meeting princesses. And for three lucky little girls at a movie theater, that's exactly what happened on Friday night. The entire exchange was captured by actor Emerson Collins, who happened to be leaving the theater at the perfect moment.

In the video, Scott is seen kneeling on the ground with two little girls dressed as Princess Jasmine and one in jeans (you've got to love a rebel). While the video doesn't pick up the conversation, it's pretty clear from the expression on the girls' faces that they're a bit in awe to have the actual Princess Jasmine talking to them. She poses for pictures with a big grin and everyone obviously has the best day ever. Collins noted in a follow up tweet that Scott had been standing with her friends and took it upon herself to approach her little fans.

I personally think the only reason those little girls were able to keep their cool was because Scott was dressed in normal clothes... if she were dressed like Princess Jasmine they would have lost their minds, I'm sure of it.

Naomi Scott deeply understands the importance of playing a Disney Princess to little girls. As she explained in an interview with BBC One, she tried not to watch the original film when she was preparing because she "wanted to translate those feelings, the way she made me feel when I was eight years old. Feeling empowered."

I think this is such an important thing for actors featured in kids' movies. To remember that in the eyes of those children, you are the person they saw onscreen. And that person holds genuine personal meaning for kids that has nothing to do with you as an actor.

So kudos to Naomi Scott for keeping the magic alive. For all the Princess Jasmines in the world.