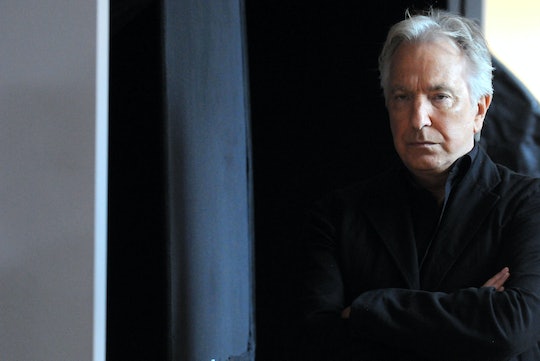 The world woke up to heartbreaking news Thursday morning, as beloved, critically acclaimed actor and icon Alan Rickman died at age 69 after his battle with cancer. While heartfelt condolences pour in from around the globe — many of his Harry Potter co-stars reacting to his death with beautiful tributes on social media — others are taking a moment to look back at his astounding career, and pay respect to a versatile actor who was able to bring complex, multifaceted characters to life.

There's no doubt that many mourners will immediately focus on his most recently prominent role as the deeply composite Professor Snape in the Harry Potter series. But diving into and dissecting his ability to play a dark yet loving, bullied yet powerful, guarded yet hopelessly-in-love character like Snape, would only be touching the very tip of an iceberg that spans decades and encompasses villains we loved to hate, the voice of a dogmatic god and a husband we just plain hated but for whom we still weirdly felt compassion.

I was first introduced to Alan Rickman from the comfort of my living room, as I watched Kevin Costner steal from the rich and give to the poor in Robin Hood: Prince of Thieves. Rickman was the evil Sheriff of Nottingham, and by far my favorite character in the film. Before the live-action adaptation, I saw the Sheriff of Nottingham as an overweight, dimwitted wolf; a very easy cartoon character to hate and dismiss. But watching Rickman's portrayal of a long-time villain transformed my one-dimensional idea of "good" and "bad."

A part of me knew I should have been more drawn to the famous protagonist or the female lead, Maid Marian, but it was the dark, spoiled, greedy-yet-completely self-conscious and somewhat sad Sheriff that caught, and held, my undivided attention.

It was one of the first moments I can clearly remember being shown a character who wasn't all bad or all good. While he was clearly the villain in the story, I found myself feeling sad for the "bad guy" who was always left wanting, just an arm's reach away from having everything that he wanted. I thought about how lonely he was, empty despite his power and ability to control the people around him. I wanted to root for him, even when I knew I shouldn't and even when he did some horrible, completely vile, unforgivable things. (Plus, he threatened Robin Hood with a spoon, and it honestly doesn't get more badass than that.)

He did the same for Die Hard's ultimate villain, Hans Gruber. Rickman was the thing of nightmares, diabolical and unapologetic. His callousness was intoxicating, transforming him into that "bad boy" at the bar you know you shouldn't pay any attention to, but end up saying "yes" to when he offers to buy you a drink. While on screen he was a stone-cold killer and criminal mastermind, he somehow managed to transform himself into that infamous "walk on the wild side" we all yearn to take. He was personable and relatable, even when he was blowing up buildings and shooting at Bruce Willis. I mean, who else can bring so much depth to a character that we find avenues by which to like him when he's shooting at Bruce Willis?

And that's what Rickman did, to and for every character he played. With his subtle mannerisms and attention to detail — coupled with his effortlessly suave persona and captivating voice — Alan Rickman turned black and white into ominous grey. He was the tiny devil on all of our shoulders, whispering ever-so-softly in our ear, telling us that it's OK to be dark and mysterious and dangerous. He was our collective dirty conscious, personified.

And now, he will be remembered, celebrated and forever missed.