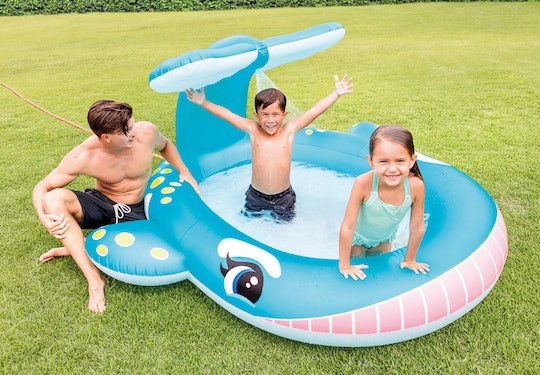 ZOMG! This Whale-Shaped Kiddie Pool Has A Built-In Sprinkler & It's Only $15

You're probably almost a month into summer vacay, which means you're most likely already out of ideas on how to keep your kids entertained. Arts n' crafts lasted a total of two hours, and there are only so many episodes of Peppa Pig, but before you fall into a total despair, check out Aldi's new whale-shaped kiddie pool. It could be your secret weapon against summertime boredom.

Inflatable pool accessories have been having a bit of a renaissance in recent years, with colorful, water-friendly products selling like hotcakes. Animal-themed items are particularly popular; from unicorn sprinklers to sloth pool floats, adorable animal pool products seem like they're a trend that's here to stay, thanks to purchaser enthusiasm and the Instagrammable moments the cute items offer. And now Aldi, a grocery go-to for many a bargain shopper, is getting in on the summer swag game with animal kiddie pools that will have your kids wanting to play until their fingers are pruney.

For kids who are into water play, the Intex Whale Spray Pool is a dream come true. First, the pool is shaped like a cute whale, including eyes and a tail, so they'll feel like Ariel adventuring through the sea. And second, the pool offers interactive play, thanks to the sprinkler in the tail, taking the fun to another level. When you attach the pool to a standard garden hose, it will spray water on the kiddos from the vertical tail for hours of fun. Check it out for yourself.

So adorable and clever, right? Imagine the fun the kids will have splashing each other in there. The pool comes with a drain plug so it won't take you too long to empty it when play time is over, as well as a repair patch in case anything tears. Plus, the little ones won't even have to stop playing for you to take a cute pic of them. It's a win for all.

But if your kids aren't whale fans for some reason (that Finding Nemo scene scarred me for life, so I get it), there's also a unicorn version of the pool that will have them feeling magical all summer long. Both kiddie pools retail for $15, and you can get them at your local Aldi while supplies last. (Psst: find your store here.) And the unicorn is just as cute and spacious as the whale, so you can't really go wrong.

One caveat, though: based on the picture, the unicorn seems to have a less powerful sprinkler than the whale and it sprays upwards as opposed to downwards. It's still fun, you just won't have the dramatic water spray effect. Basically, kids are into waterfalls should opt for the whale, but the unicorn is a great option of that isn't as important.

If you already have the aforementioned unicorn sprinkler, the kiddie pool would make for a great aesthetic, especially since they have pretty much the same color scheme. You're basically required to throw a magical summer party if you have both of those items, though. You've been warned.