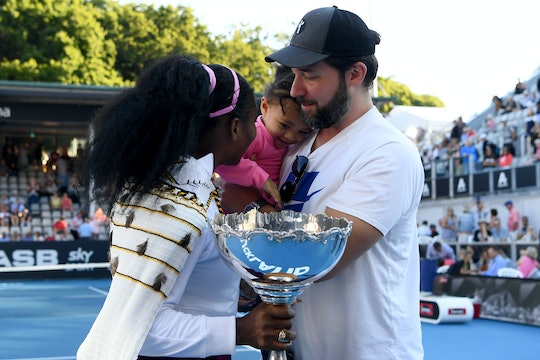 In the midst of nationwide protests denouncing racism and calling for racial equality, Alexis Ohanian announced he's stepped down from the Reddit board to help "make the world better" for Olympia, his daughter with Serena Williams, and bring diversity to "the highest levels of business."

Over the weekend, Ohanian called on Reddit, which he co-founded 15 years ago, to fill his seat on the board with a Black candidate. "It is long overdue to do the right thing. I’m doing this for me, for my family, and for my country," he wrote on Instagram. "I’m saying this as a father who needs to be able to answer his black daughter when she asks: What did you do?"

"I believe resignation can actually be an act of leadership from people in power right now," Ohanian added.

Ohanian later appeared on Williams' "Serena Saturday" live stream, where he further explained the reasoning behind his decision, saying that he started Reddit with the hopes of people building a community. "But upon reflecting on where our country is right now, I thought about what I could do beyond a social media post, beyond a donation, but really lead," he said. "We need diversity at the highest levels of business now more than ever. Once I realized what I needed to do, it became easy."

His decision was also based on family, too. Ohanian and Williams are the parents to 2-year-old daughter Alexis Olympia Ohanian Jr., who Ohanian says is "so pure" that she can't even hate Mayor Humdinger, the antagonist on Paw Patrol. Ohanian said he stepped down, knowing that his daughter would ask what he did while the nation was protesting and calling for change. "I thought about what those dollars could do for a community that has clearly suffered for far too long, and that I, with my power and my influence and my privilege want to do something meaningful to start to show a change," he explained. "To make a better world for Olympia."

Ohanian has been a vocal advocate for paid parental leave and has also been open about how he's learning to be more involved as a dad. Last year, for instance, he tweeted that he joined four different natural hair groups on Facebook so he could learn how to do his daughter's hair.

Over the past couple weeks, people all across the nation have been protesting after a 46-year-old unarmed Black man, George Floyd, died after a white police officer knelt on his neck for nearly nine minutes. As millions have taken to the streets to condemn police brutality and systemic racism, several companies have taken a stand and celebrities, like Ohanian, have pledged to make a difference during this time.

Along with stepping down from his role on the board, Ohanian pledged to donate $1 million to Colin Kaepernick's Know Your Rights Camp, which helps raise awareness on how to "properly interact with law enforcement" in different scenarios and provide free legal resources to victims of police brutality. "To everyone fighting to fix our broken nation," Ohanian concluded his announcement, "do not stop."