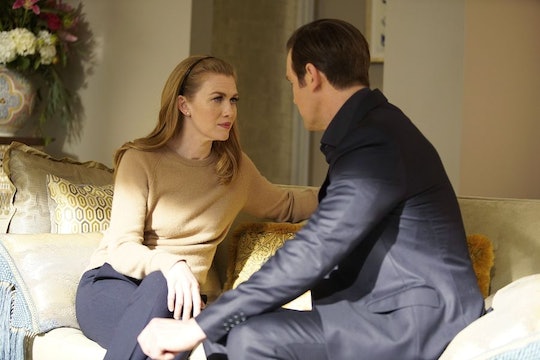 Alice & Ben Work Together On 'The Catch,' But Alice Regains The Upper Hand

The cat and mouse game might be over on ABC's newest Shondaland show. After hearing him out on The Catch, Alice started working with Ben, completely flip-flopping from the Alice who vowed to get revenge on the man that jilted her. Now, she is basically Ben's...partner? At least that's how it seems. On Thursday's episode, Ben sends Alice a text asking if he can see her, or the con-man version of the "You up?" text if you will. Alice only hesitates a second before Ben calls her and they agree to meet. Of course, Alice has no idea that Dao has bugged her house so when she tells Ben there won't be any FBI present, something she actually thinks is true. Unfortunately for her, Dao shows up and her chance to meet up with Ben is foiled, temporarily. But don't worry — Alice has regained control in all arenas, and it won't be long until the men in her life pick up on that.

Thankfully, Ben isn't a quitter, and he trusts that Alice still loves him and didn't actually mean to almost get him arrested during their meet-up. Side note: for two people who are supposed to be in a line of work that centers around cons and lies, they are very trusting. Ben being the perfect romantic con-man that he is breaks into Alice's home and puts the painting he stole for her back on her wall and leaves her a burner phone, which is very romantic, I guess. He then proceeds to call her and warn her that Dao can't be trusted and that Dao actually bugged her home. It only takes a con-man to tell a private investigator that her house has been bugged. Should we be worried about Alice's investigative skills?

Absolutely not! With the help of Val, Alice is able to trick Dao and get rid of the bug, while also finding Ben and rescuing him from a very sticky situation that could have had him killed. Then, after Alice patches Ben up and he finally tells her his real name (did anyone else forget that she still thought his name was Chris?), the two hook-up and Ben sneaks out of the house before Alice wakes. In other words, the typical ending of a story that began with a "You up?" text.

Except there's a twist. In the midst of their hook-up Alice was able to grab the one thing Ben really needed: the diamond bracelet he stole for the Benefactor. Unfortunately for Ben, Alice is smart and by taking the bracelet, she now has the upper hand in whatever game it is they're currently playing. Whatever Alice wants, she can now get, because without the bracelet, Ben (and Margot) are screwed. So maybe the games aren't quite over, yet.

It will be interesting to see how this cat and mouse game continues to play out on The Catch. Will Alice be able to keep the upper hand, or will the bracelet lead to her downfall?