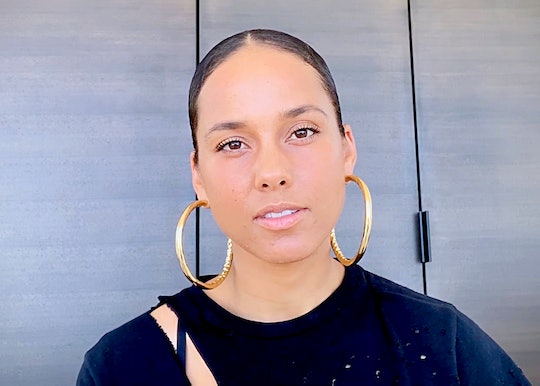 Breonna Taylor did not live to see her 27th birthday. Instead the young EMT was shot by police officers who entered her home in Louisville, Kentucky on March 13. The police officers remain on the job. Now Alicia Keys and several other women in Hollywood, including many celebrity moms, are demanding justice for Breonna Taylor in a powerful new PSA, which features Taylor's own mother.

"Do you know what happened to Breonna Taylor?" Keys says at the beginning of the PSA from the racial injustice advocacy organization Until Freedom. Taylor's mother, Tamika Palmer, then appears in the frame to explain what happened. "Three officers on the local metro police department used a battering ram to knock down her door," Palmer says in the PSA. "They fired 22 times. Eight of those bullets landed in the body of the most essential worker I will ever know."

On March 13, the three officers — Sargeant Jonathan Mattingly, Detective Brett Hankinson, and Detective Myles Cosgrove — were looking for a suspect who was not in the home, someone who was actually already in police custody, according to NBC News.

Taylor, a 26-year-old EMT who hoped to become a nurse, died that day and her mother wants justice. "Bri was murdered by the local metro police department," Palmer says in the PSA. "And after they killed her, they asked me if she had any enemies. No. Absolutely not."

The story of Taylor's death became nationwide news as millions have taken to the streets to participate in Black Lives Matter protests following the death of George Floyd, a 46-year-old Black man who died police custody after an officer knelt on his neck for nearly nine minutes. And after video footage was released of Ahmaud Arbery being followed and shot by two white men, one of them a former police officer, while he was out for a jog.

Taylor's story did not get the attention it deserves until recently and now that people know what happened to her daughter, Palmer says that the "whole world is mad." And she wants to make sure that this doesn't happen again.

Several celebrity moms joined in the chorus to demand justice for Taylor. Glennon Doyle, Gabrielle Union, Taraji P. Henson, Cardi B, Jada Pinkett Smith, Zoe Saldana, and Kerry Washington were among the stars who ask: "Do you know what happened to Breonna Taylor?"

Until Freedom's Tamika Mallory offered ideas on how to help find justice for Taylor. Call Louisville Mayor Greg Fischer to demand the officers who shot her would be fired. Call Kentucky Attorney General Daniel Cameron to demand he press charges against the officers. Call Louisville interim police chief Robert Schroeder to demand that he conclude his investigation into the shooting and share his findings with the Taylor family's lawyer and the Attorney General. And for people living in Louisville, ask their city councilors to vote in favor of banning a "no-knock warrant," which a judge can issue to allow police access to homes without first announcing they are entering.

"Breonna should not be dead," Palmer says in the PSA. "Some days I feel like I can't breathe without her. This should never happen to another family. I am Breonna Taylor's mother. Say her name."