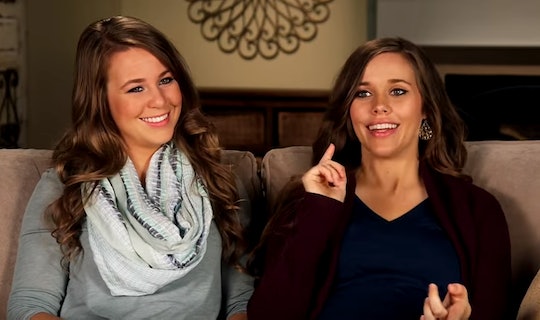 If there's one thing the Duggar family from TLC's Counting On should be pros at by now, it's shutting down critics. Well, that and wedding planning and birthing babies. And I guess house flipping and renovations and praying and grocery shopping for their massive family. But trust me, having to deal with critics on the regular has become something of a Duggar pastime. Perhaps because criticizing the Duggars is a bit of a national pastime. Now before you go feeling too sorry for the famous family, check out all the times the Duggar women have shut down haters. Because these women might look all sweet and smiley, but they all seem to have perfected a very specific way of clapping back at critics that I, for one, find somewhat satisfying.

For whatever reason, the men of the Duggar family (apart from one brother and another brother-in-law who will remain nameless here) don't seem to come under the same sort of laser-focused direct scrutiny as the women. Joseph Duggar married Kendra Caldwell and people seemed to just be happy for him. Josiah Duggar is newly engaged to marry Lauren Swanson and, again, the world appears to pat them on the back and send them off into wedded bliss. But both Kendra and Lauren, once married into the fold, might find things a little different. Especially once they get pregnant, when everyone with access to the internet decides to weigh in on your choices. Hopefully, both Lauren and Kendra will be offered a crash course in shutting down haters, Duggar-style, from their sisters-in-law.

The Duggar family has come under fire more than once for reportedly using a childraising tactic called training, which some parents have called out as being a little too close to that thing people do with their dogs. When an Instagram follower accused Jessa Seewald of treating her kids like dogs, she responded with an epic burn, according to In Touch Weekly:

We train for occupations, we train for jobs, we hire personal trainers for fitness... and we train/teach our kiddos in right behavior in the hopes that we will grow up to be caring, thoughtful, responsible adults. But I agree - dogs are not humans. Thank you for making that distinction.

Actually, Jessa Seewald, married to Ben Seewald and mother to Spurgeon and Henry, might be the queen of the Duggar smackdown. Perhaps because she tends to be the most active on social media and therefore comes under attack the most frequently. When Jessa was shamed for having a messy house, the mom-of-two did the best thing ever; she was utterly unrepentant, and shared a photo gallery of her home on Instagram. She also shared a serious rant about the value of time with your children over a clean house, writing in part:

Some of y'all may be thinking, "C'mon now, it only takes a few min to dust or wipe down a mirror..." I know, it is so. My reminder today has been that the same is true of the needs of the little people in our lives.

Fans loved it, I loved it... definitely a win for Jessa.

I honestly cannot even get into all of the conspiracy theories about Joy-Anna and Austin Forsyth. I'll boil it down to this for you; the moved their wedding from October to May last year and welcomed baby Gideon at the end of February, so everyone decided she must have been pregnant before they got married. It was a real thing among Duggar followers, and while Joy-Anna never addressed the issue, she did manage to shut people down with a simple photo of herself, still pregnant, at Christmas. Which really threw off all of those people doing their conception math like it was the Middle Ages.

Pictures are worth a thousand words.

Duggar watchers are all about keeping an eye on the baby bumps, though it seems impossible to figure out which bump size is the magical one to keep people from criticizing these women. When fans were shaming pregnant Jinger Vuolo for having a bump they felt was too small, she went the same route as Joy-Anna and shut them down with a glorious bump photo at 25 weeks. Plus she wears ripped jeans and stuff, so I'm clearly rooting for her.

Jana's Doing It Her Own Way

One of the most fundamental purposes in life for a Duggar woman is to get married and have babies. While some fans might struggle with this, there are plenty of people who are criticizing Jana Duggar for not being married or having children. Rumors about Jana swirl around the internet on a constant basis, hypothesizing about why she isn't getting married. Jana's response? As she said during an interview on TLC:

I'm just not out to get married to the first one who comes along.

Instead, she's refusing to say what she plans to do about her situation. Perhaps because she doesn't consider her life and accomplishments a situation that must be handled.

And that, my friends, is the greatest clap back of them all. Just living your life no matter what anyone might think you should do. Because maybe a woman can want something from her life other than husbands and babies. What a novel concept.