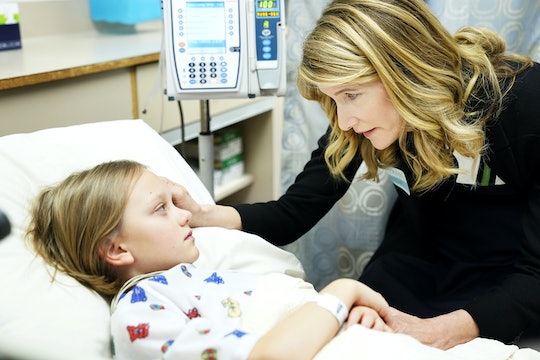 Amabella's Panic Attack In 'BLL' Isn't As Unlikely As You Think, Experts Say

If you watched the recent episode of Big Little Lies, you are probably still thinking about how Amabella's panic attack led her to hide in a closet away from her classmates as they discussed the harsh realities of climate change. It wasn't the typical hyperventilating, sweaty palms, freak out that is typically portrayed on screen when a person experiences a panic attack, but as Amabella was loaded into an ambulance on the show, it was clear that her condition was serious. The questions as to what a child's panic attack looks like and why they happen are some tough topics for any parent to discuss. As a mom, I cannot imagine the fear that seeing my kid in distress would bring to mind.

So first things first. What is a panic attack? According to the American Academy of Child and Adolescent Psychiatry (AACAP), a panic attack is described as "an abrupt episode of severe anxiety with accompanying emotional and physical symptoms." Laura Gray, Ph.D., attending psychologist at Children’s National Health System tells Romper that the symptoms of panic attacks can vary from child to child, but can look like "breathing fast/heavy, difficulty catching their breath, reporting that their heart is racing, feeling intense sense of fear, feeling dizzy, trembling, and being tearful with difficulty calming themselves."

Dr. Gray also says that "panic attacks can last for several minutes to several hours. There are often no precursors to panic attacks and they develop without warning."

Panic attacks in children could also look as though "breath is so restricted that it can lead to death," according to Aliza Waksal Pressman, Ph.D., Co-Founding Director of the Mount Sinai Parenting Center and Assistant Clinical Professor for the Department of Pediatrics Division of Behavioral and Developmental Health at Mount Sinai School of Medicine. But Dr. Pressman assures parents that a panic attack will not lead to death. She also tells Romper that "some children feel like running or escaping from the environment in which they are having a panic attack and others may be frozen."

But the aftermaths of a panic attack can vary as much as the actual attack itself. Dr. Gene Beresin, executive director of The Clay Center for Young Healthy Minds, tells Romper that kids may react differently than an adult would post-panic attack. "They may respond with a temper tantrum or crying uncontrollably and unable to explain why they are acting this way. Or they may complain of physical symptoms (often associated with the panic attack), such as intense stomach pains, headache, or trouble breathing."

According to the Centers for Disease Control and Prevention (CDC), the exact cause of panic attacks in children is unknown, but factors such as biological makeup, stress level, temperament, and environment play a role in determining a child's risk level for experiencing a panic attack.

Maureen Healy, author of The Emotionally Healthy Child and emotional coach at Growinghappykids.com, explains to Romper how different triggers can provoke panic attacks in children, and why they are definitely different from typical tantrums. "A panic attack is triggered by a fear, which is so enormous the child cannot contain his or her emotional state. This is different from a normal tantrum about not wanting to go to camp or put on your socks," she says. "A panic attack is a very specific state of emotional dysregulation where a child gets emotionally hijacked about a very specific issue such as a person with a tattoo, going over a bridge, standing near the edge of a mountain, being forced to swim, or something that uniquely they find not only scary ⁠— but terrifying."

Dr. Gray explains that a child's first panic attack can sometimes occur initially after a traumatic or scary event has taken place, but warns that the occurrence of subsequent attacks can also take place afterward if they experience a trigger to remind them of the initial attack. "Fear of having panic attacks often increases frequency of attacks and they may generalize to broader situations when the child is feeling nervous or anxious," she says.

Panic attacks in kids can also be a result of of an accumulation of factors in their life leading up to a panic attack. "Children who may be at risk may exhibit other signs of anxiety such as difficulty separating, excessive worries, specific or generalized phobias, clinginess, difficulty with self regulation, or if they come from a family with a lot of panic attacks or anxiety around them," says Dr. Pressman.

In the case of Amabella on Big Little Lies, Dr. Kathryn Smerling, a family psychologist practicing in New York, says that the classroom discussion about climate change that triggered her panic attack was part of a greater issue. "You can approach climate change and things that may cause anxiety in a way that’s soothing and proactive and helpful to kids, or you can inspire fear," she tells Romper. "And the teacher should have made it a class project that they could all do to help the world. Then, it’s productive, it’s experiential, the kids feel they’re doing something, and it wouldn’t cause an anxiety attack. I think in the case of Amabella, as a fictional character, it was that she was also expressing the anxiety that her parents were feeling. We can’t underestimate that."

According to Healy, when a child is experiencing a panic attack, it is imperative that parents keep their cool. "Parents needs to stay as calm as possible, and be a refuge for their emotional child. The child who is emotionally off-balance needs to learn to calm and get back to their center," she says. "Parents need to be there for the child, and even say, 'I'm here for you' and hug them ⁠— or be with them in a way that is helpful."

Dr. Beresin recommends that parents explain to children what has happened after the attack, when they are in a more calm state. "For younger children, this may be difficult as they cannot conceptualize why the fight or flight response is happening. They just don’t understand what a state of panic is," he tells Romper. "It is most important to explain what a panic attack is in terms your child can understand, when they are not having a panic attack. Explanations themselves will not stop a panic attack when it occurs, but if you set the stage for understanding what a panic attack is, emphasizing what is happening during its occurrence may be helpful."

After the immediate needs of the child are attended to, Dr. Smerling recommends parents seek out help in the form of play therapy, even if it is just a few sessions to get through whatever is provoking their panic attacks. "Play therapy is wonderful. It does not have to be long term support, and I think a lot of parents are afraid of labeling their child with 'he or she goes to a therapist' but it’s probably the best thing in the world," she tells Romper. "I truly believe there is such a ridiculous stigma on play therapy. And for what? All you’re doing is helping your child get through a rough patch and understanding that your child may not be as verbal as if they were 30 years old."

Dr. Pressman recommends parents seek out a licensed therapist specializing in treating anxiety to work with the child and help them through the cause of the attack, and that parents can also try incorporating different strategies at home like mindfulness and exercise. "You can even have fun practicing these tools. They are still children and bringing joy and confidence into the toolbox sets a tone that this isn't a burden," she says. "It's also important not to make panic attacks the center of your relationship or family discussions. It's a balance of addressing the issue and being supportive, without feeding the idea that it's so catastrophic when and if it occurs"

Panic attacks in kids can be acute, occurring only once, or recurring, which may lead to a diagnosis of a panic or anxiety disorder, but Dr. Beresin explains that it is important that children who have had a panic attack be examined by their doctor. "It’s important to have a complete medical examination as what may appear to be panic disorder could rarely be a medical illness, such as thyroid or other hormonal disease, cardiac disorder, seizures, or other illnesses that present themselves as panic disorder," he says.

In addition to seeing medical professionals, keeping other family members and teachers in the loop when a child has a panic attack or is experiencing anxiety may be helpful for your family in terms of support. Dr. Smerling says that the key to having these discussions is honesty. "No one's family is perfect. There is a Leonard Cohen quote that reads, 'There is a crack in everything. That’s how the light gets in.' And that’s the same thing ⁠— there’s a crack in your child, so let in the light and maybe that’s how you can see that they need extra support."