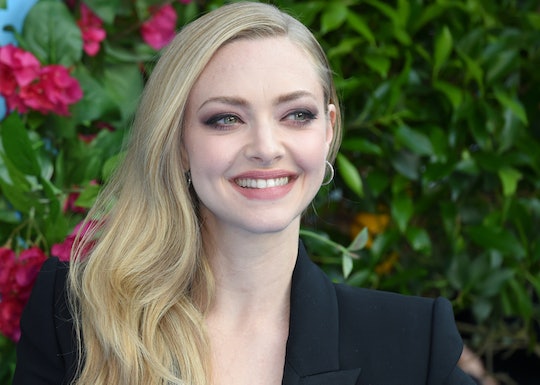 After not sharing anything too revealing on social media while she was expecting her second child, actress Amanda Seyfried posted a precious photo from her pregnancy that featured her bump and her daughter.

Earlier this week, Seyfried and her husband Thomas Sadoski announced that they welcomed their second child together. And one day later, the Mean Girls actress posted a photo of herself wearing an unbuttoned flannel shirt and white tee, which stretched over her bump. The couple's 3-year-old daughter, Nina, is also in the photo, reaching up to touch her mom's pregnant belly.

"The before," Seyfried captioned the sweet photo.

Before this week, Seyfried didn't talk about her pregnancy publicly or post any bump photos, so this photo was surely a treat to see. Seyfried and Sadoski surprised fans when they announced that they had quietly welcomed a son, sharing this news on Instagram with the help of two charities: INARA, an organization that gives medical attention to war-wounded children and War Child USA, which works to protect children against the impacts of war.

"Since the birth of our daughter 3 years ago our commitment to the innocent children that are so brutally affected by conflict and war has been a driving force in our lives," the couple wrote in the announcement. "With the birth of our son, the work of INARA and War Child has become our North Star."

In addition to giving fans a glimpse at her pregnancy with her second child, Seyfried's new Instagram post also gives fans a look at her life with her daughter, who she rarely shows on Instagram. Seyfried told Entertainment Tonight in June that she doesn't share Nina's face online and will "let her choose when she wants to do that later on in life."

But whenever Seyfried shares a glimpse at her private life, like her most recent post, it's always a sweet little treat.