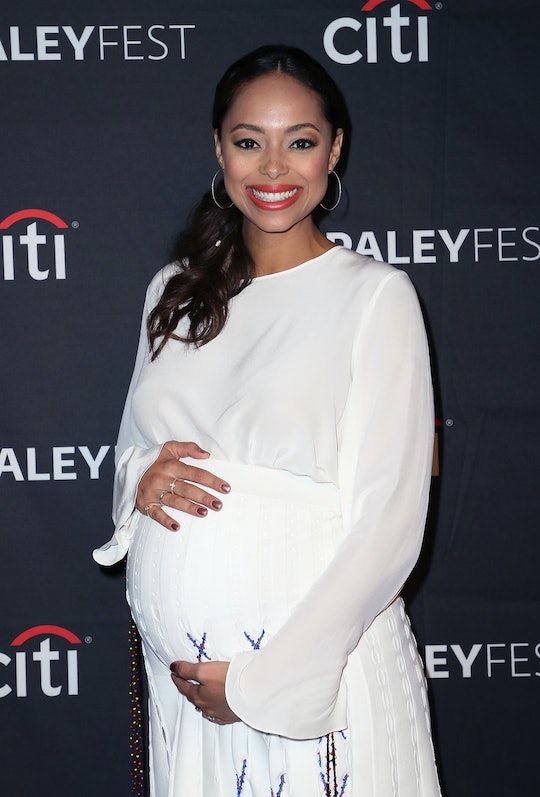 This 'Happy Together' Star Had The Most Enviable Pregnancy Ever

Amber Stevens West is about nine months pregnant with her first child — but that doesn't mean things are slowing down for her. While on hiatus from her new sitcom Happy Together, the actress took a moment to catch up with Romper about her busy life. Amber Stevens West opened up about becoming a mom, why audiences might find her character on Happy Together to be refreshing, and how grateful she is that her dream of being a working mom is falling into place.

Stevens West and her husband, actor Andrew J. West, met about a decade ago on the set of ABC Family's Greek, where they played each other's love interests. In May of this year, the couple announced in an Instagram post that they were expecting their first child, a baby girl. When I asked Stevens West what has surprised her about pregnancy, she had an answer that many people would envy — she's been surprised by "how easy it's been." *Cue jealous rage from pregnant women everywhere.*

"Everything has been really easy," Stevens West tells Romper over the phone, fully aware that she is lucky to be having a smooth pregnancy. "I've felt relatively normal up until about a week ago, and that's only because she's now getting gigantic, and it's really getting heavy, so my mobility has been cut down." The couple is pretty excited to be having a girl, though Stevens West says they would have been happy either way. She says, "I'm very comfortable with the idea of having a girl. I grew up with just my sister and I. My husband was raised by all women. So we are very comfortable with female energy, so that coming into the house feels like it'll fit right in."

Stevens West stars in Happy Together, premiering on CBS on Oct. 1, as Claire, an interior designer who loves her ordinary suburban life with her accountant husband Jake, (played by Damon Wayans Jr.). Suddenly, the couple's Netflix-and-chill lifestyle gets interrupted when Jake's client, a pop star named Cooper James (played by Felix Mallard), decides to crash at their house for a few weeks. The plot is based on a true story involving Harry Styles, and the former One Directioner is actually executive producing the series, according to Billboard.

So wait, was Stevens West pregnant at all while shooting Happy Together? Did she have to hide her bump from the cameras? Did she pull a Gal Gadot? Yes, yes, and yes! "I was pregnant the entire time. It was pretty crazy," she tells Romper. As a working actress for more than a decade (you've probably seen her in 22 Jump Street, The Carmichael Show, and Ghosted), Stevens West knows the business. So, she knew that a multi-cam sitcom (a show that is typically shot once a week in front of a live audience, such as Friends or The Big Bang Theory) would be an ideal job during pregnancy and early motherhood. She explains:

When I wanted to start a family, I always hoped that I had the opportunity to work on a multi-cam while I was pregnant. First of all, it's the greatest schedule, so if you are pregnant, you don't have to work really long hours. Also, it's a really fun distraction from all the changes that are going on inside of your body and you get to be silly, and do only one live show a week, so it's not too much exertion of energy or anything. It's the perfect scenario.

As one can imagine, being visibly pregnant while playing a character who is not pregnant can be a challenge — but it's nothing the Happy Together team couldn't handle. "We did have to hide my belly, so that got increasingly tricky, but we had a lot of fun with it — getting creative, and working with the camera, and the costumes, and props," Stevens West explains. "Everybody kind of had a hand in how to make it seem normal."

The Happy Together cast shot eight episodes before going on their eight-week hiatus — and that timing is no coincidence. The team shifted the production schedule to accommodate Stevens West's pregnancy and maternity leave, and a few weeks after her baby girl is born, filming will resume.

It's easy to tell by the way Stevens West talks about Claire that she loves playing this character. "I really enjoy getting to play a character who doesn't have to be perfect, and who isn't always the pretty one in the room," Stevens West says. "She can just be herself, and I find that really refreshing." She also loves the way the show depicts Claire and Jake's relationship, explaining, "When I read the script, I thought it was so refreshing to see a couple on TV that actually really likes each other and has a lot of fun together." She continues, "These people are best friends, and they have a lot in common, and I can relate to that more than the alternative."

It's clear that Stevens West is living her best life right now, and I can't wait to watch what happens on Happy Together.