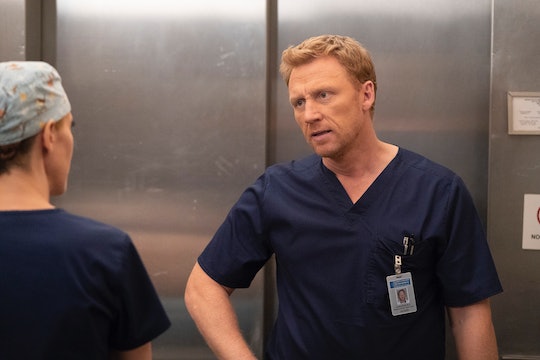 Owen never has it easy when it comes to romantic relationships on Grey's Anatomy. Whenever he's comfortable with someone, fate throws a wrench in his plans for a healthy future with that person. Now, Amelia ended things with Owen on Grey's Anatomy again and Twitter has mixed reactions. His marriage with Amelia went south faster than you can say "Who cut the LVAD wire?" and just when you thought they were on their way back to something definite, Teddy returned with her pregnancy bombshell.

Although it's hard to invest a lot of time in another romantic saga involving Owen, I can't help but hope for a happy ending for him after years of watching him get his hopes up with a relationship or marriage. Fans knew that he was in for a rocky season when Teddy showed up at Grey Sloan Memorial Hospital pregnant with his baby. That growing belly was like Chekhov's gun. You knew it was going to come up again by the end of the first part of the season.

Now, it's all out in the open and Amelia is ready to let Owen make his own decision about both her and Teddy and obviously he's confused. One of them is his BFF and the mother of an unborn baby he's always wanted. The other is his ex-wife turned current girlfriend and co-parent to foster children. It's actually super complicated, so it's probably a good thing that Amelia has stepped back to give Owen some time to consider all of his options.

Fans on Twitter are understandably conflicted about the newest Grey's Anatomy love triangle.

While some fans might be all for Teddy and Owen having a happy ending after years of the will they/won't they shtick, others are still here for Amelia having a healthy relationship with Owen. Especially after Thursday's episode.

Teddy didn't really do anything wrong, though. She didn't choose to have a one night stand with Owen and end up pregnant. And they have more history than almost anyone on Grey's Anatomy. It's only natural that some fans still want them to work things out.

The whole Teddy, Owen, and Amelia love triangle could have been a lot messier than it already is. All three of them are playing the selfless card so as not to ruffle anyone's feathers in a very mature way. They all have strong feelings about each other, but everyone is too mature to actually act on them. It's definitely one of the more mature love triangles in the show's history. That's probably why some fans don't know who to root for.

Kim Raver, who plays Teddy, told E! News that the plan was always to make their love triangle a lot healthier and less intense than you'd typically see in a drama.

"I think what's so exciting about this love triangle is that really from the get-go, we wanted it to be a little bit different, and not be like this catty, woman-against-woman, like 'let's get the man,' because that's so un-Grey's Anatomy," Raver explained.

Kevin McKidd, who plays Owen, added, "It's going to create a lot of challenges, I think, for Owen and Amelia... It's kind of heartbreaking that they're in such a good place and that this kind of atomic bomb is going to hit them. I hope they survive, but who knows?"

Although the women did their fair share of arguing about it over the open body of a windstorm victim, I have a feeling the love triangle won't be easily resolved.

After Teddy told Owen on Thursday's episode of Grey's Anatomy that she just wants him to be there for the baby and that they are "are off the table," it seemed like Owen had an easy choice to make between Amelia and Teddy.

Amelia later told him that Teddy is a romantic option for him whether he sees it or not. She's *Teddy*, after all. She's the best friend who's been by his side and who has had romantic feelings for him on and off throughout the years. If I didn't love Amelia so much, I'd say that Teddy and Owen are endgame on Grey's Anatomy. For right now, I'm not going to put that out in the universe.