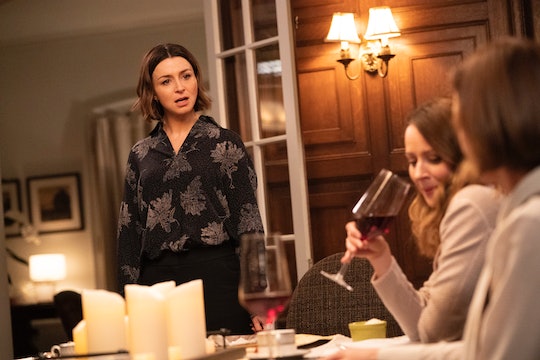 Fans Are Rallying Behind Amelia After Her 'Grey's Anatomy' Episode

After tonight's episode of Grey's Anatomy, it's clear to see why Amelia isn't close to any of her sisters. After Amelia and Link went to dinner at her sister’s house for dinner and things went from bad to worse. Her sisters bombarded her with memories of everything she had done wrong over the years, barely letting her get in a word to defend herself. It was hard to watch, but Amelia's Grey's Anatomy episode also showed how far she has come since her days on Private Practice.

For those who didn't meet Amelia before she showed up at Grey Sloan Memorial Hospital, she struggled with substance abuse, suffered loss with a miscarriage, and lost the love of her life before she made the trek to Grey's Anatomy. That's a lot for anyone to handle, let alone someone who was already as fragile as she was. It's honestly hard to believe that the woman on the show today is the same one who went through all of that.

But when Amelia's sisters piled on her about the past and all of the ways she had disappointed or hurt them, it was like an intervention without a practicing addict in the room. Amelia kept her cool the entire time, though, until she had to stick up for herself, and even then, she handled herself well. It just shows how far she has come from the person who made a lot of mistakes to the capable surgeon she is now. And Grey's Anatomy fans on Twitter are seriously proud.

Amelia probably didn't expect the ambush that awaited her as soon as she stepped into her sister's house, but there was also no getting out of the dinner. Luckily, she had Link to lean on for support, but nothing could have prepared her for the rocky trip down memory lane and the reminders of everything she had done to wrong her family over the years.

When her sisters weren't talking about the mistakes she had made when she was on drugs, her mom was talking down to her about her short-lived marriage to Owen. It was kind of heartbreaking to watch, but the way Amelia composed herself shows that she really has come a long way.

Even viewers who aren't big Amelia fans can appreciate the strength she showed in her special standalone episode tonight. At at the end, she didn't push Link away but instead acted like the bigger person and apologized to him for lashing out and making him feel like he isn't important to her as anything other than a booty call.

Maybe I'm just a sucker for underdogs, but I have been rooting for Amelia since day one. Granted, she has been a lot more tolerable since she had that tumor removed, but she has been through a lot. Her episode tonight was very likely the Grey's Anatomy writers' way of pointing out how much she has grown. It might have also been a way to bring Amelia and Link closer together without another on-call room or blue light room hookup and that's kind of great too.

No matter what your feelings are about Amelia in general, you have to hand it to her for coming back from the brink of death and destruction more than once, only to find herself at the top of her field with a full healthy life. I know the show isn't called Shepherd's Anatomy, but I wouldn't hate more episodes that focus on Amelia alone. Hopefully this means that she is headed toward more happiness, growth, and maybe even a Facebook official relationship with Link.