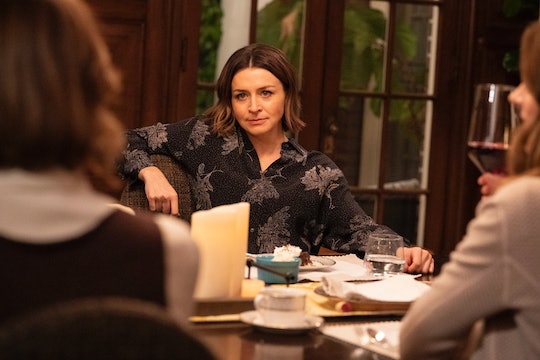 Amelia has never really gotten along with her sisters on Grey's Anatomy. That's probably why she and Derek were so close and even studied in the same medical field as neurosurgeons. But in the preview for tonight's episode, it looks like she will be reunited with two of her three older sisters, leaving some fans to wonder where Lizzie is on Grey's Anatomy. You can see Nancy in the preview, along with someone presumed to be Derek's other sister, Kathleen.

When Lizzie came to the hospital to donate nerves for Derek's hand surgery, however, she told Meredith that Meredith would always be part of the family and that she wanted to get to know Meredith and Derek's children too. It was a different kind of approach than Nancy took when she appeared and Meredith and while Amelia have always been a lot closer than Meredith and Lizzie, Lizzie is one of Derek's four sisters who viewers still remember fondly. So it's kind of disappointing that she's not in tonight's episode.

Like almost everyone else in the Shepherd family, Lizzie is a doctor, so it's possible that her absence in tonight's episode will be explained away by some kind of work obligation. She also has a few kids, as it has been mentioned on Grey's before, so she might be busy raising her brood and just can't make what is likely a last minute sit-down dinner with Amelia. If she had been in tonight's episode, though, it would have been nice to see both of Derek's sisters who fans actually like together on-screen at the same time.

In a sneak peek from tonight's episode, Amelia unexpectedly runs into her sister Nancy when she and Link arrive at another hospital to perform a surgery. From that one uncomfortable interaction alone, it's clear that Amelia will be in for similar treatment when she sees the rest of her family. Since Lizzie was less passive aggressive and more compassionate, her character probably wouldn't have meshed well if the plan is to ambush Amelia at dinner. Hopefully, without Lizzie there, Link can come to Amelia's defense somehow.

Back in January, TVLine reported that Amelia would get her own standalone Greys Anatomy episode this season. Since then, fans have been anticipating what it would be like and how it would tie in with the rest of the story. Judging by the fact that the only other main character prominently featured in the episode is Link, it could serve as a way to help Amelia face some family demons while getting closer to the hunky doctor in the process. And honestly, I am not mad at that.

Caterina Scorsone, who plays Amelia, told TVLine that the episode is more than a one-off filler and that when she heard what it's about, it filled her with "nervous excitement." And, she added, "It's almost like a little movie on its own."

Hopefully Amelia's sisters won't do any damage that can't be undone by the time Amelia and Link leave to head back to Grey Sloan Memorial Hospital. If they somehow undo years of work that Amelia has put into bettering herself, fans will not be happy.