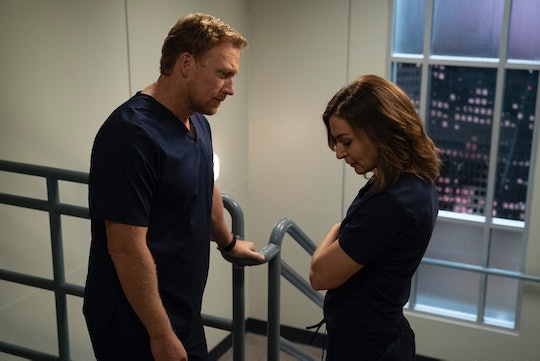 Amelia's Addiction Storyline On 'Grey's Anatomy' Has Fans Heartbroken For Her

Amelia has come a long way from the addict fans knew her as on Private Practice, but her journey on Grey's Anatomy has had its own struggles, including her continuing battle with her sobriety. Enter Betty, who has helped Amelia face her past while also forcing her to relive some of her issues through the teen. And as emotional as it has been, Amelia's addiction storyline on Grey's Anatomy has touched and inspired fans all season.

Amelia struggled with alcoholism, pill usage, and eventually heroin during her time on Private Practice. When she made the move to Grey's Anatomy, most of that was behind her, but as any addict knows, the urges and struggle stays with you forever. This is probably why she bonded with Richard soon after she arrived at Grey Sloan Memorial Hospital and why she has been able to help Betty this season.

Unfortunately, Betty's own addiction got the best of her and she continued to run away and periodically use drugs behind Amelia's back. There were times when Betty's drug use even triggered Amelia and led her to seek out narcotics anonymous meetings. To Amelia's credit, she hasn't gone back to hard drugs since she hit rock bottom on Private Practice, but her addiction storyline has made fans feel for her this season.

Amelia's big storyline this season, other than her love triangle with Teddy and Owen, has been taking care of Betty. The experience has really helped her grow up in a way fans haven't seen before. Although Betty has tried to stay sober and do right by Amelia, she has had her fair share of slip-ups. And now, fans are feeling for Amelia more than ever as she is on the brink of losing Betty.

Amelia has been through enough as it is. On Private Practice, her fiancé James overdosed after they used drugs together for what was supposed to be the last time. Before that, she had already abused her power as a doctor to forge prescriptions, and afterward, the loss hit her hard. It took her a long time to come back from that and now she is being put through the ringer again. This time, with Betty's addiction.

Even if you never knew Amelia on Private Practice, you can appreciate how far she has come. Whether or not she loses Betty now, it has all likely been leading up to the promised Amelia standalone episode of Season 15.

When it was announced that this season would be extended to 25 from 22, Grey's Anatomy showrunner Krista Vernoff told TVLine that part of the reason for the extension was to allow for a special episode all about Amelia.

"I had an extra standalone episode idea that I wanted to do this season," she revealed. "So it doesn’t really lengthen our season too much. It allows us to tell [this Amelia-centric] story that we might not otherwise have gotten to tell this season."

Hopefully that means all of this added heartache will have been worth it for Amelia to grow from the experiences and move forward without relapsing herself. If Betty were to die from her overdose, I don't think Amelia could take it.

Hopefully Betty's overdose will be Amelia's last heartbreak of the season. Amelia has come too far to take any steps back and she deserves a happy ending this season more than almost anyone else. At this point, I am so over Amelia drawing the short straw, especially when her intentions are pure. Now if only Owen could get his act together, then things would finally be on the upswing for Amelia.