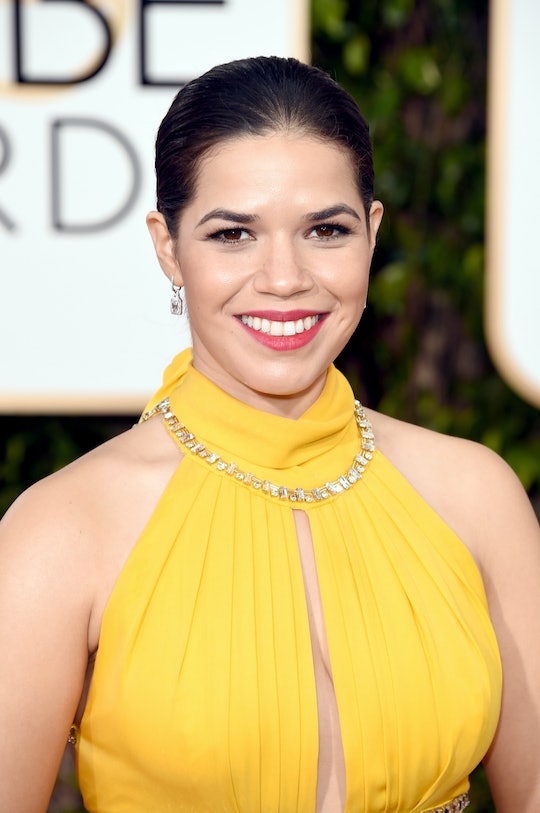 During the 2016 Golden Globe awards on Jan. 11, America Ferrera and Eva Longoria made the best joke of the night, further proving that two women should always run award shows. In their introduction for Best Actor In A Television Drama Series, Ferrera and Longoria referenced a gaffe from the Golden Globes nomination ceremony, in which Ferrera, who was announcing nominees, was mistaken for Gina Rodriguez.

During the 2016 Golden Globes nominations announcement, the official Golden Globes Twitter account confused the Ugly Betty star for the Jane The Virgin star. The Tweet was quickly deleted and replaced with a correct one, but of course, the Internet does not forget. Gina Rodriguez was gracious and understanding, telling Entertainment Tonight, "We always make mix-ups in life." But the mistake also highlighted an underlying sexism and racism that has plagued Hollywood for always. Instead of being outraged, though, Rodriguez took the opportunity to congratulate a fellow actress."America's lovely," she told Entertainment Tonight. "She's so beautiful and such a fantastic actress. If there's anybody I want to get mixed up with, it's her for sure." That's classy AF, my friends.

Ferrera and Longoria took the stage (and the opportunity) to poke fun at the mix-up, introducing themselves properly before letting the audience (and viewers everywhere) know that they are not, in fact, other Hispanic actresses.

Twitter users thought the exchange was perfect, poignant and better than any joke host Ricky Gervais had told. Here are just a few of the many twitter reactions viewers had to this perfect Golden Globes moment.

So perfect, and sadly, so necessary.