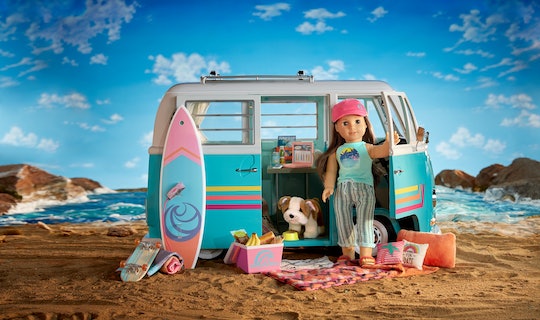 If you’re a child of the ‘90s, you likely have a special place in your heart for American Girl Dolls. The darling line of bright young women (and their accompanying stories) took the doll world by storm when it debuted in 1986. Today, the brand is owned by Mattell and continues to captivate children with characters who are designed to represent America in all its diversity. Take American Girl's 2020 Girl Of The Year, Joss Kendrick, and her Volkswagen Surf Bus. A surfing and cheerleading spitfire, Joss is not only a serious athlete, she’s partially deaf, a disability that in no way slows her down... especially not with a set of wheels like this one.

The sweet teal ride, an homage to the West Coast’s surf culture, can hold up to four (FOUR!) 18-inch dolls and comes complete with 50 components including “a storage bench that folds into a bed, a pop-up stove, and a fold-out table” and is a partnership with Volkswagen Accessories.

To make sure the Olympic hopeful is comfortable on her surf getaways, the bus is fully loaded with all the creature comforts today’s modern beach babe would require, like a mattress, sleeping bag, and bedding, cooking supplies, a cooler, beach towel, first aid kit, and (naturally) a surfboard and surf racks on top.

Did we mention the horn and ignition make sounds? Kids can even push a button to hear a message from Joss. Oh, and it has a video projector with a fabric screen and a set of image discs for watching surf videos on the beach. Because, why not? You can even catch a shot of the VW bus in action in this official Joss Kendrick music video:

The camper, which weighs 46 pounds and requires four AA batteries, retails for $650 and is appropriate for children ages 8 and up. Just in time to get pumped up for the 2020 Olympics, Joss's Volkswagen Surf Bus is available as of February 20 on americangirl.com and at American Girl retail stores.