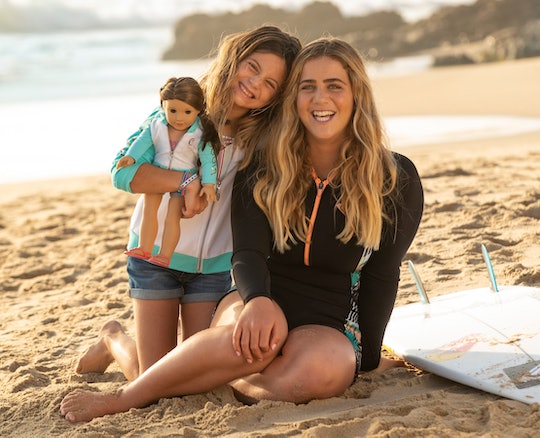 If you have a dedicated American Girl fan at home, you know that one of the most highly-anticipated announcements of every new year involves the introduction of a brand new member of the AG family. So without further ado, American Girl's 2020 Girl of the Year is here, and she's pretty rad: Joss Kendrick is a "fierce athlete born with hearing loss and a passion for surfing and competitive cheer," and to celebrate her arrival, AG is partnering with 17-year-old surfing prodigy Caroline Marks — sort of the human version of the doll, if you will.

"I feel like we're super alike," says Marks, who's poised to make history next summer as a member of the first-ever U.S. Women's Olympic surfing team. "She's a dedicated surfer who enjoys spending as much time in the water as possible, like me."

Like so many young women her age, Marks was more than familiar with AG long before she had the opportunity to team up with the brand professionally.

"It's funny because I have little sisters and there are always American Girl dolls around the house," she tells Romper. Marks remembers a trip to the American Girl store in New York City during which her little sister Victoria begged for a doll, saying she'd do "whatever it took" to get one.

"She was freaking out," Marks laughs.

Now, Marks is thrilled to work with American Girl to help bring awareness to the sport of surfing for girls.

"I was usually the only female," Marks says of her early days surfing, and "even now, they kind of look at you like 'why are you out here?' It can be hard to get waves."

Like Marks, Joss Kendrick faces obstacles on her path to surfing success — and also like Marks, she meets them head-on. As explained in the character's two-book series, Joss "loves to catch the waves any chance she can get" in her hometown of Huntington Beach, California ("Surf City U.S.A."). The first book tells the story of how Joss pushes herself to excel at a second sport, competitive cheer, when her brother dares her to try out for the team.

An inspiring tale to be sure, but AG fans know a huge part of every doll's appeal lies in her outfit and accessories. (Well, it's true.) Joss wears a swimsuit, hoodie, and shorts, plus a removable hearing aid in her right ear; other products available include a surfboard and swim gear, cheer outfits and equipment, and her English bulldog, Murph the Surf Dog.

This spring, the Joss collection will expand with the addition of a Volkswagen Surf Bus stocked with a "storage bench that folds into a bed, a pop-up stove, and a fold-out table," as well as "working headlights, turn signals, windshield wipers, and a radio, plus sounds for the horn and ignition."

Marks has some pretty exciting developments in the works this spring too (no word on whether any of them involve a Volkswagen Bus), but what she's most looking forward to in the months following Joss Kendrick's debut is a break.

"I'm just excited to have a few months off from competition," Marks says. "My favorite thing is just getting super, super big waves." The Olympics are also at the top of her list of things she's excited for, of course, as is spending time with her family (both of which sound like very American Girl-esque pursuits). Marks is also preparing to lead a session of surf camp for girls in Florida, another part of her ongoing effort to bring awareness to females in surfing.

"Women's surfing is definitely gaining more traction, but it's for sure still male-dominated," Marks says.

With women like Caroline Marks out there on the water, hopefully it won't be male-dominated for long.

More Like This
14 Top Gun Costumes For The Whole Family To Buy Or DIY
These 2022 Halloween Squishmallows Are So Cute, It’s Scary
The Best Halloween Family Pajamas To Match Your Boos
The Best "Stranger Things" Halloween Costumes To Wear In 2022