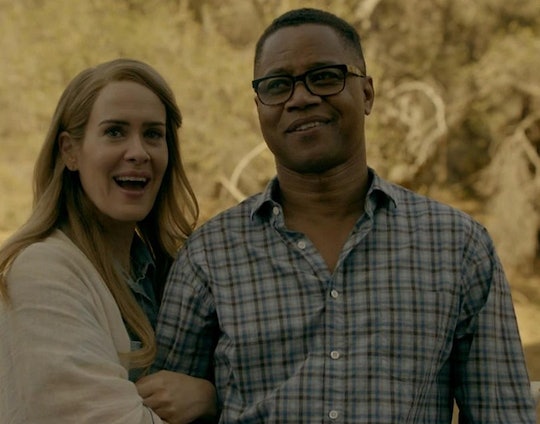 The dead bodies of Season 6 are barely cold, but already American Horror Story Season 7 theories are circulating, because why not? With just 10 episodes, Season 6 was noticeably shorter than any of the seasons before it, which makes it even harder to deal with the period of time until the next season premieres. As with most seasons, the speculations are already high as to what the theme of AHS Season 7 could be and how Season 6 may have hinted at it in some way.

It’s no big secret that typically, the preceding season contains random clues peppered throughout regarding the following season. So naturally, some theories about Season 7 are based on what fans believe they saw during AHS: Roanoke. And while some ideas about yet another found-footage season seem dead on arrival (no pun intended), it is entirely possible that all of the necessary clues are right there, waiting to be figured out before the theme is even officially announced.

From sea monsters to aliens being revisited, there are already so many AHS Season 7 theories to hopefully tide you over until the official announcement is made, which likely won’t happen until sometime during the spring.

These are just some of the more plausible American Horror Story Season 7 theories out there and I use the term "plausible" lightly because with a supernatural show like AHS, things can get as crazy as they need to, and then some.

The biggest clue that some fans are laying claim to is that Season 7 will be about a sea monster by the name of Cthulhu. In fact, one of the final tweets made by AHS about Roanoke featured waves in an ocean and the words “the monsters are all gone,” with “sweet dreams” written across the video. I don't know about you guys, but that kinda sounds like a cryptic hint to me.

In H. P. Lovecraft’s fictional stories, Cthulhu was a sea monster type of creature that sleeps and dreams in a underwater city. And, according to Redditor MonkeezPa, the creature’s ability to communicate with humans while it sleeps, and driving them insane by doing so, would make sense for Season 7 of AHS.

On Reddit, myroanokenightmare66’s theory about Season 7 revolves around the fact that Freak Show characters are going to be revisited during next season. Since Freak Show took place during the 50’s and 60’s, a time when Area 51 and aliens in the Southwest were much more of a “thing,” it would be an organic way to tie in the two things. The Redditor theorizes that Freak Show characters could be captured for testing at Area 51 or even give reason as to why the aliens chose Kit in Asylum.

Now, the idea of an AHS season centered around an orphanage is nothing new, as fans have been theorizing and hoping for such a season for a while. But according to Redditor Colsephur, it would be the perfect opportunity to bring together all of the present-day orphans of the AHS universe. Like Michael, Tate’s evil son from Murder House, and Flora and the young Polk boys from Roanoke. Also in attendance could be Lachlan from Hotel, so there are plenty of kids to fill out the cast of orphans, but it’s just a matter of being able to handle kids being terrorized or doing all of the terrorizing. I'm getting chills just thinking about it.

According to funky-al on Reddit, there have been plenty of signs to point to a WWII-era theme for Season 7. Some of the biggest clues include when Lee, Matt, Flora, and Shelby were watching TV in a hotel in the reenactment and there was a brief shot of an American flag on the moon shown. There was also a confederate flag prominently featured in the Polk barn. Then there's the fact that Dylan (the actor who played Ambrose in the reenactments) mentioned his time in Afghanistan multiple times, clearly pointing out war and the battlefield as a possible hint of what's to come.

A Retelling Of Asylum

Redditor liveordie2 posted a theory that AHS Season 7 will be a retelling of Asylum and that Season 6 to 10 will rehash everything that happened in Seasons 1 to 5. Their argument is that Roanoke resembled Murder House, so Season 8 could be a new version of Asylum, but done in a fresher way. According to the theory, there would be a similar setting, but different characters and stories told.

Another popular theory is that Season 7 of AHS, which will air in 2017, will be all about what some see as the nightmare of having Donald Trump as the new president. OK, so this one is probably not going to happen, but I had to toss it in there.

There is still plenty of time for more AHS Season 7 theories to come out of the woodwork and for more fans’ imaginations to run wild with ideas. But until Ryan Murphy gives fans something — anything — to go on, the sky is the limit.