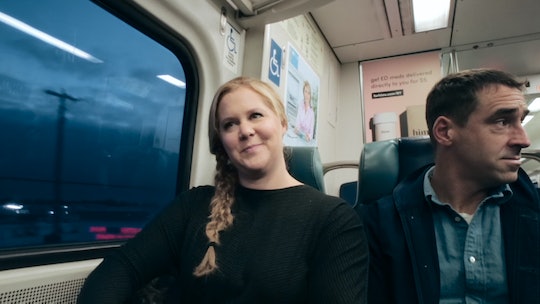 Beyond documenting a candid and honest look at her difficult pregnancy, Amy Schumer also discusses her husband's autism diagnosis throughout Expecting Amy, her new docuseries on HBO Max, to "sort of destigmatize it."

"My husband has Asperger's. If you don't know what that is, neither do I," Schumer jokes while doing stand-up in footage featured Expecting Amy, which is now available to stream on HBO Max. "I wanted to talk about it to sort of, I don't know, destigmatize it. So many kids... so many comedians don't get diagnosed. You grow up thinking you're bad or wrong and your brain is just different.

Schumer married chef Chris Fischer in February 2018 after meeting through Fischer's sister who also happened to be Schumer's assistant, according to E! News. In her Netflix special Growing, which premiered in March 2019, the comedian said she "knew from the beginning that my husband's brain was a little different than mine." Rather than ignoring those differences, the couple decided to see a specialist and look for a diagnosis.

People living on the Autism Spectrum can sometimes struggle with communication and social interactions, according to the National Institute of Mental Health.

In Expecting Amy, a three-part docuseries that follows the comedian through her pregnancy with the couple's son Gene and their first year of marriage together as she's on tour, Schumer talks about what Fischer's autism diagnosis has brought to their relationship and how she finds there are "some really charming parts" of her husband's autism.

For his part, Fischer tells Schumer in Expecting Amy that she has "paid attention to my behavior in a way that nobody had before and noticed things because you're very observant and kind of put together the pieces."

One such example came as Autism Spectrum Disorder specialist Dr. Kimberly Gilbert gave the diagnosis to the couple. As she explains in Expecting Amy, "When I told Chris the diagnosis, Amy stood up and said, 'I need a hug.' And he said, 'From Dr. Gilbert?' Chris didn't really understand that Amy wanted the hug from him."

While Fischer might struggle with social cues, Schumer talks about the positive side effects of his autism. "He can't lie," for example, which can offer real transparency in a relationship. At one point in Expecting Amy, Schumer asks Fischer on camera, "Do you ever wish I was a little bit thinner?" His response? "You're perfect."

Perhaps most importantly, the couple discussed how cathartic Fischer's diagnosis was when it came to learning to communicate effectively. Fischer said he found the diagnosis "empowering," while Schumer clarified, "I don't think either one of us want him to change, but it's just there's some stuff that can make stuff easier for him."

You can catch Expecting Amy on HBO Max starting on Thursday, July 9.

More Like This
The Best Halloween Movies On Hulu To Watch As A Family
Blake Lively Revealed She's Pregnant With Baby #4 In A Sparkly Dress & Sky-High Heels
Khloé Kardashian Shares First Look At Her Son & His Birth
All Your Preschooler's Elmo Questions, Answered — By Elmo Himself!