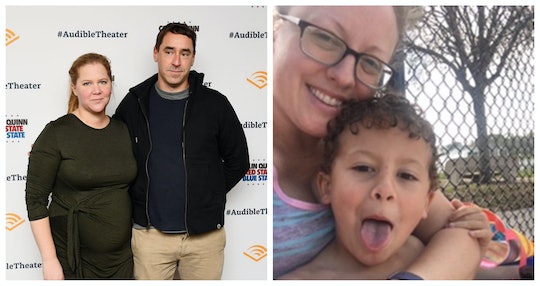 A few nights ago, after my husband and I finished putting our two little guys back to bed for the twentieth time, we settled in to watch Amy Schumer’s Netflix Special “Growing”. I was expecting to laugh and relate, as I always do when it comes to Amy’s vulnerable, honest comedy, but I wasn’t expecting to be on the verge of tears. Between talking about her misshapen baby bump belly button and working to bust menstruation stigma by going deep into the topic, Amy revealed her husband Chris Fischer’s recent diagnosis of Autism Spectrum Disorder — a condition not always obvious, and affecting more than 1 in 100 people, per the National Autistic Society.

Schumer talks about falling over during her pregnancy, and being surprised by her husband’s reaction: rather than dive in to help, he just stood there, horrified. She talks about his responses, which sometimes vary from what we might call neurotypical, explaining that she loves who he is (an award-winning chef, no less). As Schumer was describing some of the personality characteristics she noticed about her chef-husband early in their dating life and into their marriage, I looked at my husband and said, “Wow! He sounds like Isaac.”

We knew from very early in our oldest son Isaac’s life that there was something very different about him. As he got older, the parts of who he was that set him apart from most people became more and more apparent. Isaac crawled, walked, talked, read, and wrote early for his age. But all these positive advancements in his development also came with their fair share of challenges. We knew he needed extra help, and we knew we needed it as well, but every time we took him to a doctor they kept telling me he was “just a normal, active boy.” He was very social, outgoing, and personable, so when we would take him to doctors trying to get some help, they would see this articulate, charming little child and all but totally dismiss our concerns he may be struggling with a disorder. It took five (long) years, but last fall at the start of kindergarten, we finally had the diagnosis we had pushed for all those years. Isaac was diagnosed with complex ADHD and tested into the gifted program at his school.

Giftedness is treated as a special need in many schools and Isaac’s giftedness certainly did explain a lot about his behavior and gave him opportunities at school to be challenged as much as possible. After seeing a behavior medicine specialist a few months ago, Isaac was also diagnosed with sensory processing disorder. Knowing Isaac has been struggling but not knowing for sure with what and how to help him, it has been a relief, even if a bit overwhelming, to finally have answers and resources. I don’t love labels, but with each new diagnosis I begin to see and understand Isaac as he was born to be and am better able to help support and guide him, doing my very best to not try and change who he is. He isn’t his diagnosis, but his diagnosis helps us understand and support him.

Because of his very black and white view of the world, he has a hard time playing pretend.

We have struggled over the last seven months to get Isaac the support he needs at school and home and the transition into school has been challenging for him. Although as far as we know at this point Isaac is not on the autism spectrum, the combination of having ADHD, SPD, and giftedness creates personality traits in him that are very similar to those most commonly exhibited by people with ASD. Much like how Amy described Chris, Isaac is very literal and doesn’t tell lies — at least not well considering he will whisper to me, “Mommy, what I am saying isn’t true, but I am just pretending OK?” No poker face with this one.

Because of his very black and white view of the world, he has a hard time playing pretend. He can do it, but he has to work at doing make-believe activities and likes to tell people over and over that he knows it’s not real and is just pretending. Of children with ASD, 34 percent said that the “worst thing about school” was saying the wrong thing, and being picked on by other kids for it, as a 2011 survey, Great Expectations, found.

Although Isaac is very kind and outgoing he can also be very loud and intense, which can be overwhelming to other kids. Isaac craves constant movement and stimulation, which can be distracting to those around him. He is good at sharing his things, but not so great at knowing how to not interrupt people when they are speaking. He loves routine and has a very difficult time with transition even from school to home, not to mention any big moves. Isaac loves to make people laugh, but isn’t always sure of appropriate ways to do so. When he learned that kids will laugh when he says potty words, he became a one-man potty-word-machine. His friends started to get in trouble for laughing at his inappropriate words, which made them want distance from him and that was hard for him to understand. Since he doesn’t always pick up on the social cues that he needs to stop or that someone is irritated with him, we work hard on learning limits, boundaries, and how to know when someone needs space. The older and more mature he gets the better he becomes at understanding and allowing for limits in order to keep friends.

One of the things I love most about Isaac is that he doesn’t choose his interests based on social or gender norms. His favorite superhero is Wonder Woman, he loves rainbows and unicorns, and is drawn towards strong, smart female characters on TV shows and in books like Carmen Sandiego, Owlette, and Dot. He also loves things which are more traditionally seen as masculine, but without trying to, he routinely breaks gender stereotypes because while he likes to fit in and be accepted, he doesn’t really understand or care about norms.

Watching Growing, my eyes teared up. We rarely hear or read about romantic relationships for people on the spectrum.

I was so happy when Amy started to describe how she loved that Chris didn’t care about societal norms and how that was a positive aspect of their relationship. “All of the characteristics that make it clear that he’s on the spectrum are all of the reasons I fell madly in love with him,” she says in Growing.

Isaac loves having lots of friends and when he feels different or “other” it is very challenging for him. We even had to discontinue his therapy appointments because he had to leave school early once a week to attend them and that made him feel different from his classmates. He likes to stand out — but on his own terms. He doesn’t want to stand out because of his struggles, he wants to stand out because of the many ways he is amazing and special.

Watching Growing, my eyes teared up. We rarely hear or read about romantic relationships for people on the spectrum on TV or in the media, so to hear Amy talk so lovingly about her husband really encouraged me to believe that the personality traits that make Isaac both unique and incredibly challenging could very well be the very traits that his future partner or partners are drawn to.

During an interview about her new special on Late Night with Seth Meyers, Amy said the diagnosis has been great for their marriage and went on to say,“That’s why we both wanted to talk about it, because it’s been totally positive. I think a lot of people resist getting diagnosed… because of the stigma that comes along with it. The tools he has been given has made his life so much better and our marriage and our life much more manageable. I want people to not be afraid of that stigma.”

Every day Isaac challenges me to see beyond what I have always known to be “normal” and embrace a wider, more inclusive way of seeing the world and the people in it. I hope Isaac continues to push back when he feels someone is trying to change him in unhealthy or unrealistic ways — even if that person is me. Amy and Chris’s willingness to allow us into their lives in this way has been such a gift to me and I know so many other parents out there with special children who they hope will be loved well in a world full of walls, division, and judgement and I have a lot of hope that Isaac is going to find someone who will love him just the way he is.

More Like This
From Captions To Gifts, These Are All The Kindergarten Graduation Ideas You Need
Fun Ways To Celebrate National School Nurse Day
34 Instagram Captions Perfect For Preschool Graduation Photos
Should You Be Giving Your Toddler Melatonin To Help Them Sleep?