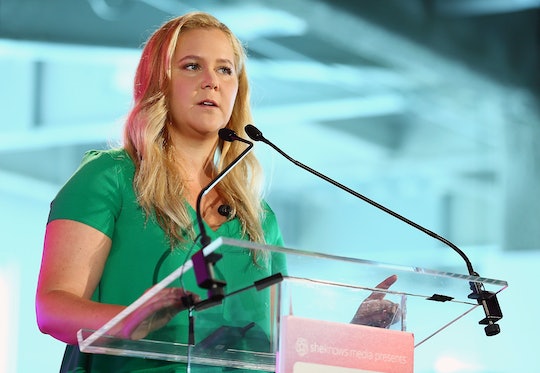 Anyone who has suffered through morning sickness knows just how much it can affect a person's daily functioning. And those who have battled hyperemesis gravidarum? They know exactly how unbearable those nine-plus long months can be. This severe form of pregnancy-related nausea and vomiting often results in dehydration — and sometimes even hospitalization — and it can be extremely debilitating. Just ask Amy Schumer. Because as it turns out, Amy Schumer is still struggling with HG in the third trimester, and was forced to cancel the rest of her shows.

On Friday, Feb. 22, the actress and stand-up comedian took to Instagram to give her followers a pregnancy update... and the mom-to-be is obviously still struggling with HG. "Due to complications from hyperemesis I am not cleared to fly for the next couple weeks," Schumer wrote, noting that she is canceling the remainder of her tour, according to People. "The baby and I are healthy and everything looks good. But I am in my 4rd trimester and I am still nauseous all the time and vomiting. I vomit mostly every time I ride in a care even for 5 minutes."

I have a pretty good attitude about it and some days I feel good for a couple hours. But mostly it sucks. I wanted to push through and do my shows. Because I hate letting people down and I love stand up and money! But more than that I have to think about my health and the baby. I know you guys get it and people are like, 'B*tch are you ok? Take it easy.' But i's still embarrassing to have to cancel.

Unsurprisingly, Schumer's fans quickly offered words of support. One Instagram user wrote, "I’m amazed at the fact that you made it this far. This mamma would’ve said f it and stayed in bed for 9 months lol 😂😂😂 hope you start feeling better soon!"

Another follower commented, "Yeah your ability to get through in your condition has been astounding. I just think back to how I felt 13 years ago and the nauseating feeling comes on! Worth every second. Let go of any embarrassment no good comes of holding emotions like that."

Yet another person wrote, ""Hang in there!!! Your fans aren’t going anywhere ❤️."

Someone else chimed in with, "Girl, I had this during my pregnancy and I assure you the moment you give birth you’ll feel, instantly, better!"

If you remember, Schumer first revealed her HG diagnosis back in November when she shared a photo of herself lying in a hospital bed, according to Today. Schumer was forced to cancel shows in Texas at the time because of her condition. "I’m fine. Baby’s fine but everyone who says the 2nd trimester is better is not telling the full story. I’ve been even more ill this trimester," she wrote. "I have hyperemesis and it blows. Very lucky to be pregnant but this is some bullsh*t!"

Over the past few months, the stand-up comedian has shared a number of light-hearted posts about her pregnancy. She's also posted plenty of updates involving her continued HG battle — including videos of herself vomiting, HuffPost reported.

Hyperemesis gravidarum typically starts easing up between 12 and 20 weeks of pregnancy, according to WhatToExpect. However, the condition can last longer — and even throughout the entire pregnancy — for some women. Unfortunately for Amy Schumer, it looks like she falls into the latter category.

Heres to hoping Schumer is able to find some level of relief during her final stretch of pregnancy. Honestly, it's amazing that she's been able to battle through for this long. Amy, you're a rockstar — and your fans are definitely pulling for you. Feel better soon, mama.