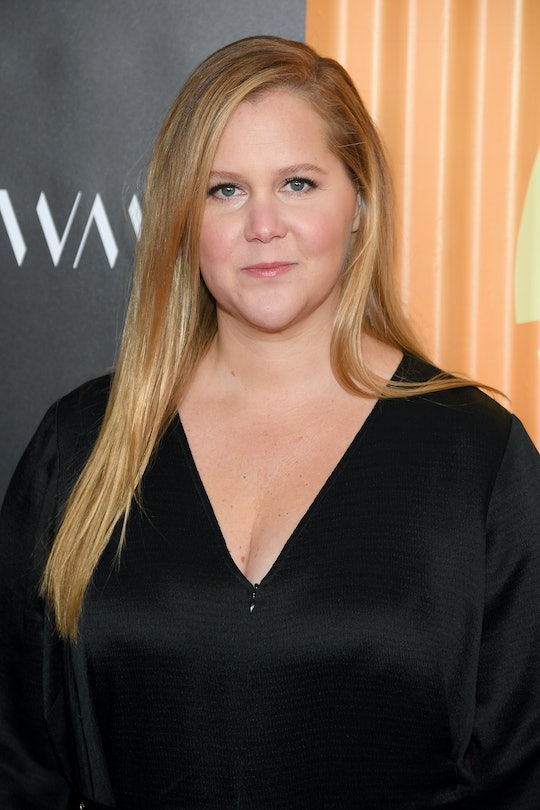 Roughly seven months after giving birth to her adorable some Gene, Amy Schumer has shared the reason behind her C-section and it's quite simple. Because that was how she wanted to welcome her son into the world.

The I Feel Pretty actress and her husband, chef Chris Fischer, welcomed their first child in May, marking the end of a difficult pregnancy for Schumer. Throughout her pregnancy, the comedian was was riddled with constant nausea and vomiting, as well as hospital visits due to her hyperemesis gravidarum diagnosis. And when it came time to welcome her baby boy, Schumer revealed on her Instagram Story on Dec. 17 that she opted to do so via C-section.

On Tuesday, Schumer posted a photo of a medical form, which looked like a pretty standard form filled out by parents at a pediatrician's office. Schumer indicated that Gene was delivered at 39 weeks gestation via C-section. But when asked the "reason why" she had the C-section, her answer was seriously amazing. "My Choice," Schumer wrote.

Although the fact that Schumer's C-section was elective is news, fans first learned about her giving birth in this way just a couple of days after Gene's arrival. She did so by posting a photo of her scar — serving as the smile for a face to which she digitally (and hilariously) added eyes and hair — to her Instagram Story. (And this is why we love her.)

In July, Schumer again shared a photo of her C-section scar. This time, it was in response to Instagram users shaming her for sharing a photo of herself rocking mesh underwear while pushing her newborn in a stroller. "I’m really sorry if I offended anyone with my hospital underwear," she captioned the Instagram post. "Except I’m just kidding. #csection #balmain."

To me, though she didn't explain further, it makes perfect sense that Schumer had an elective C-section. She suffered her entire pregnancy with nausea, she was hospitalized multiple times and had to cancel the rest of her comedy tour. She felt miserable and had to get IV fluids because she couldn't keep anything down. So by 39 weeks, I would imagine she was just done. And you know what? With her doctor's blessing, that's 100% her choice to make.

More Like This
Alec & Hilaria Baldwin Welcome Baby #7, And Revealed Her Cheerful Name
Scarlett Johansson Explained The Meaning Behind Her Son Cosmo's Name
Here's How To Keep Your C-Section Incision Dry
Khloé Kardashian Shares First Look At Her Son & His Birth