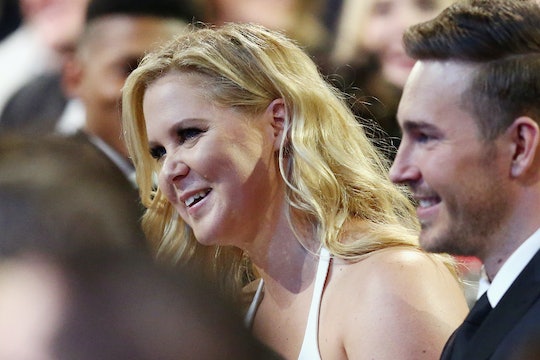 Move over, Meghan Markle! Just hours after the Duchess of Sussex gave birth to her first child, Amy Schumer took to Instagram to reveal she, too, had given birth. In the first photo of Amy Schumer's baby boy, the first-time mom is glowing with happiness as she cuddles her newborn in her arms. The caption Schumer wrote for the photo read, "10:55pm last night. Our royal baby was born."

Though brand new, Schumer's son, whose name has yet to be revealed, looked identical to his mom in his very first Instagram photo. Schumer's husband, Chris Fischer, was there, and as you can see in the baby's photo reveal he was just as excited and filled with love as his wife. While Schumer has seemingly enjoyed making plenty of jokes about her pregnancy lining up almost exactly with the Duchess of Sussex, at least she can say she had the pleasure of revealing her son to the world before the latest "real" royal baby.

To make Schumer's baby's birth even better, the actress made a pit stop on the way to the hospital on Sunday night, May 4. Before sharing the first photo of her son, Schumer posted two pictures of herself on the steps of The Met in New York City — where stars from all over the world will be walking the red carpet into the Met Ball on Monday, May 5. Schumer has attended in the past, but now she can say even her newborn son has had the honor of climbing those steps along with her.

"Met look this year. Last night on the way to the hospital," Schumer wrote, captioning the two photos in which she's wearing sneakers, a long grey tunic, and a nude colored open cardigan. It's not exactly the kind of ballroom attire we usually see on the steps of The Met for this grandiose event, but for Schumer — presumably already in labor in the photos — it was the perfect "do it for the 'gram" moment.

On Sunday morning, the same day she would eventually give birth, Schumer also used Instagram to reveal the sex of her baby. The way she chose to do so was pretty interesting though, and not just because it was done on Instagram. To be fair, that's kind of how all things are done now anyway, right? But, back to Schumer's announcement — it came after her public denouncement of fast food chain, Wendy's, claiming they are "the only fast food chain refusing to protect farmworker women from sexual assault and rape in the fields."

Prior to her baby's sex reveal being used for good, Schumer's last pregnancy update was pretty hilarious aside from being a reality check for impatient supporters. The Instagram post included a photo of Schumer with her bare 9-month pregnant stomach on display as she sat on the edge of a bed in a medical office. Her husband, Fischer, is in the background on his phone. Though Schumer is smiling, the caption really says it all.

Oh yeah does it feel to everyone like I’ve been pregnant for a long time? It must be getting annoying to you all that I’m still pregnant...

Congrats to Schumer, Chris, and their families and friends on the birth of their baby boy. We can't wait to learn more about him once Schumer and Fischer are ready to share!