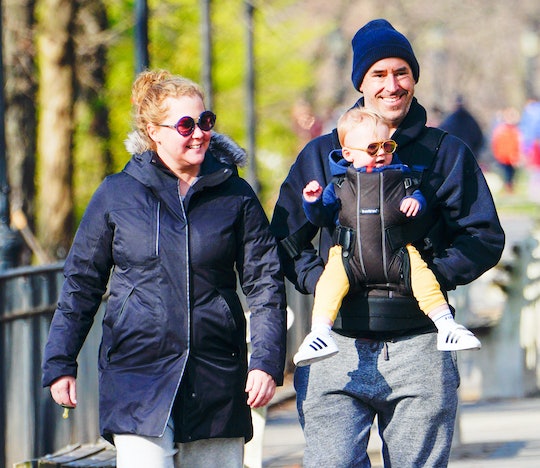 She's a famous comedian, he's a professional chef, so it was really only a matter of time before Amy Schumer starred in a cooking show alongside her husband Chris Fischer. And that's just what the world is getting. In a new series coming to the Food Network, the couple will mix comedy and cooking for some prime quarantine content.

Coming this spring, Schumer and Fischer, who've been married since February 2018 and welcomed their adorable son Gene in May 2019, will mix their two talents in a new series on the Food Network called Amy Schumer Learns To Cook, according to Variety. In the upcoming series, Fischer, who penned The Beetlebung Farm Cookbook and won a James Beard Award, will teach Schumer how to cook up some dishes while their family is under quarantine at home. While an exact premiere date hasn't been announced just yet for series, which will be comprised of eight 30-minute episodes, the Trainwreck actress is expected to whip up some cocktails and one can only hope sweet little Gene will make an appearance.

"Amy and Chris will give an unprecedented look at their lives as they are quarantined in their house," Food Network President Courtney White told Variety in a statement. "Shot entirely themselves, Amy’s boundless humor and Chris’ culinary skills show viewers how they navigate life while at home making the best of these turbulent times with some good laughs and good food."

The couple will reportedly try their hand at some "culinary themes" like tacos, pasta, and the ever-popular "clean out the fridge" dinner, with Fischer focusing on farm fresh ingredients whenever possible, while Schumer focuses on cocktails. Fischer, of course, has loads of experience in this area, considering he has cooked at high-end restaurants in New York City and London.

To get a small taste of how the couple will work together, please watch this video of Schumer trying to trim Fischer's hair. As Schumer uses the clippers on his neck Fischer says, "That feels good," while she reminds him, "It's not really about that," and then they bicker over whether or not Schumer is cutting it "willy nilly." And now you know this will be quality content.

This actually isn't Schumer's first foray into the world of cooking shows. Back in 2014, she did a parody of traditional cooking shows like Top Chef on Comedy Central's Inside Amy Schumer called "Sauced" with the premise of two drunk roommates trying to cook something from the contents of their fridge. A shriveled lime, four baby carrots, and some expired yogurt. I suspect Fischer's cooking will be slightly more elevated as he's known for creating dishes like guinea hen with salsa verde and stinging nettle pasta, but Schumer will probably be just as entertaining.