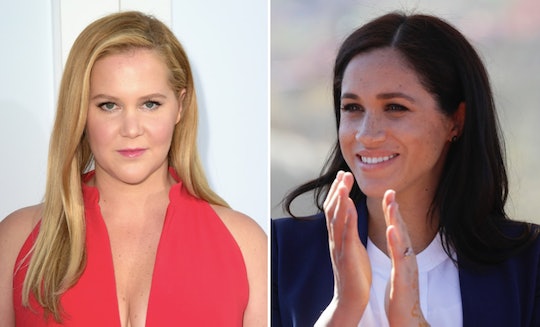 There's a lot that we know about Amy Schumer's pregnancy. We know she's been a trooper through the horror that is hyperemesis gravidarum — we've seen and heard her throw up on her way to a show thanks to a video she shared on her Instagram — and now we know that not only is her first child due soon, but her due date may even coincide with another very famous child on the way. In fact, Amy Schumer's due date is around the corner, and she could be giving birth right around the same time as Meghan Markle.

How do we know this? Well, for starters, Schumer revealed during her Netflix standup special, Growing, that she is pretty sure she and Markle are almost exactly the "same amount" pregnant, according to HuffPost.

"I'll tell you who it's not fun to be pregnant at the exact same time as... Meghan Markle. I think we're, like, to the day the same amount pregnant," Schumer said in her special, as Cosmopolitan reported.

This makes sense, though, given that Schumer actually used a photo of Markle to announce her own pregnancy. The photo in question was just when Markle started showing, and just after Kensington Palace had confirmed her and Prince Harry's pregnancy news. So, the timing really does line up.

So, given that we know Markle is due in the coming weeks, as Harper's Bazaar reported, it can only mean one thing: Schumer is due soon, too.

Schumer also revealed during an interview with InStyle that this also positions Markle as somewhat of her nemesis, honestly because she just looks so good. (Relatable.) "Why is she my nemesis? Because she’s pregnant at the same time as me and I'm not going to let her get away with that," Schumer told InStyle. "So maybe I’m feeling competitive, like, 'Oh, Meghan looks better than me and she has a tiny small bump and she’s wearing high heels, and I already look 10 months pregnant and I’ve been wearing flats for the last four years.'"

It's not the first time Schumer has made some pretty amazing and hilarious content out of her tough pregnancy. For instance, Schumer joked in the Growing trailer:

If you had a good pregnancy, like if you're someone who enjoyed being pregnant, I just hope your car flips over... That's what I wish for you... Here's the thing, you're pregnant, but you don't change who you are. I hate women that start to act really precious, like you don't stop being you. You don't stop working, or like... drinking, you know?

Of course, though Schumer has had a legitimately hard go of pregnancy (she was actually hospitalized for HG, according to TODAY, which is characterized by extreme morning sickness and, at one point, she had to cancel much of her tour because of it) true to form, she has somehow found a way to make it as funny and entertaining as possible.

With mere weeks if not days until she's due to have her first baby, it's clear that the jokes are only going to get better as Schumer enters motherhood... with Markle by her side.