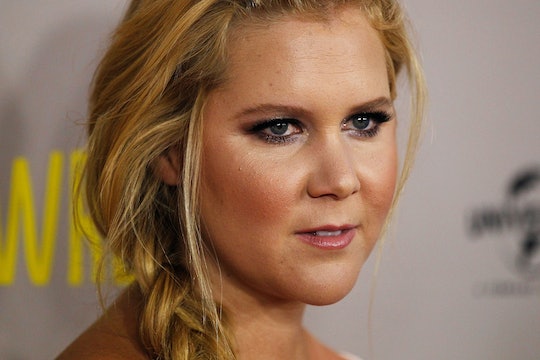 The societal pressure for moms to "snap back" ASAP after giving birth is still alive and well, especially for women in the public eye. Never mind that they've just spent the better part of a year growing a human with their bodies, of course. Nope. Which is why Amy Schumer's response to Jessica Simpson's postpartum update is so perfect.

But first, a little background info is in order. You might remember that Jessica Simpson and her husband, Eric Johnson, welcomed their third child back in March. Fast-forward to today, and their baby girl Birdie is 6 months old. To mark this milestone, Simpson recently shared that she's lost a whopping 100 pounds since her daughter's birth, TODAY reported.

"6 months. 100 pounds down (Yes, I tipped the scales at 240)," Simpson captioned an Instagram photo of herself wearing a belted black dress that accentuates her waist. "My first trip away from #BIRDIEMAE and emotional for many reasons, but so proud to feel like myself again. Even when it felt impossible, I chose to work harder."

Of course, it's amazing to hear that Simpson is feeling like herself again. That's all that matters, right? All moms should feel empowered in their bodies, and that looks different for each person.

Meanwhile, Amy Schumer and her husband Chris Fischer welcomed their first child — a son named Gene — in May of this year, according to USA Today. Which means their little guy is about 4 months old at this point.

Like many people, Schumer caught wind of Simpson's postpartum update. And the comedian responded to the postpartum body post on Monday, Sept. 30, according to POPSUGAR, writing, "Ok Simpson! Well I've lost 10 pounds and 100 dollars to my sister playing poker. #norush #givememymoneybackkim."

Side note: I 100 percent don't think Schumer is trying to shame Simpson — she's just pointing out that every journey is unique. And for the record, the designer can take a joke. "You're hot," Simpson commented on the post, according to People.

Schumer's Instagram followers couldn't have loved her sentiments more. One person commented, "Yes mama!!! #norush," along with a slew of heart emojis.

"15 months later I'm still in no rush," a fellow mom wrote, along with laugh-crying emojis

Yet another Instagram follower shared, "I’ve always loved you but this caption by far is the best!"

Schumer's honest reply shouldn't be a surprise to any of her fans, as this is how she approached pregnancy and motherhood. The I Feel Pretty actress didn't shy away from getting real about her hyperemesis gravidarum when she was pregnant, for instance — in fact, she has shared videos of herself puking on more than one occasion.

There was also that time when Schumer declared her love for hospital mesh underwear while pushing her son in a stroller in only mesh undies and a sports bra. "5 weeks. Hospital underwear for life!" she captioned the hilarious (and super relatable) Instagram update. This was soon followed by an "apology" during which the new mom proudly showed off her C-section scar. "I’m really sorry if I offended anyone with my hospital underwear. Except I’m just kidding," Schumer wrote on a photo of herself pulling down her pants to reveal the horizontal scar.

In conclusion, I'd just like to give a shoutout to Amy Schumer for continuing to keep it real when it comes to motherhood. Because although Jessica Simpson should feel proud about meeting a personal goal, it doesn't have to be the standard for all women.

The moral of the story? Live life at your own pace. You're in charge of your body and as Schumer mentioned, there's "no rush" to get back to your pre-baby self, if ever. Thanks for the reminder, mama.