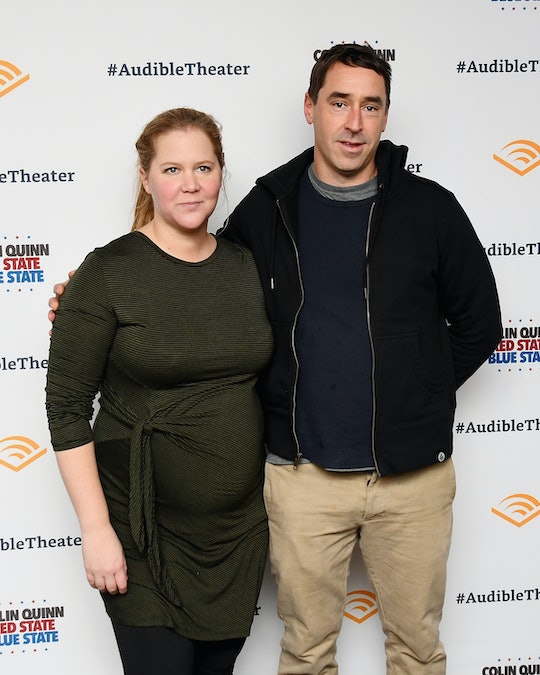 Amy Schumer's Son Gene Wants You To Donate To Charity

Amy Schumer is one very honest comedian — and she is just as honest as a mom to her son, Gene Attel Fisher, with her husband, Chris Fisher. Even in her updates about her son, she is telling it like it is. So, it shouldn't come as a surprise that Amy Schumer's son Gene is always down for a "good cry" because who isn't down for a good cry these days? Let's be real, with the current state of the world, there is so much to cry about.

Babies are pretty easy to please. They only like a few things — sleeping, eating, and crying — which can be said for most adults, too. And baby Gene is turning out to be a pretty predictable baby. Late Friday night, Schumer shared the sweetest photo of Gene to her Instagram where she updated her followers about all of Gene's likes, dislikes, and bad habits.

"Here is our son Gene," she wrote in the caption of the photo. "He likes looking around and and laughing at his toy, the black and white butterfly. Always down for a nap and a good cry if he poops on the reg."

What baby isn't into all of those things?

But there is something that sets Gene apart from other one month old babies his age — he wants people to volunteer or donate to Immigrant Families Together, a donation fund that pays bonds to release detained immigrants and donates goods to refugees that have been just released from detention. He might be young, but he is already advocating for others, and that is awesome.

Needless to say, Schumer's followers are pretty impressed by her advocating son and his sweet little face.

"It's just too much how beautiful his smile is," Schumer's former co-star, Goldie Hawn, commented. "Little Buddha boy Bless you Gene. Gogo loves you already!!"

"He is perfect," Professor Emily Oster said. "Also, thanks to Gene for giving us something to DO."

Schumer has advocated for stricter gun laws, as reported by TIME, asked people to donate to RAICES Texas, a charity that helps detained immigrants at the border, and even announced her pregnancy on Instagram by encouraging others to vote, according to ABC News.

There are a lot of things going on in the world that are worth having a "good cry" over. But the more that these charities help others, the less there is to cry about. Take it from Gene.