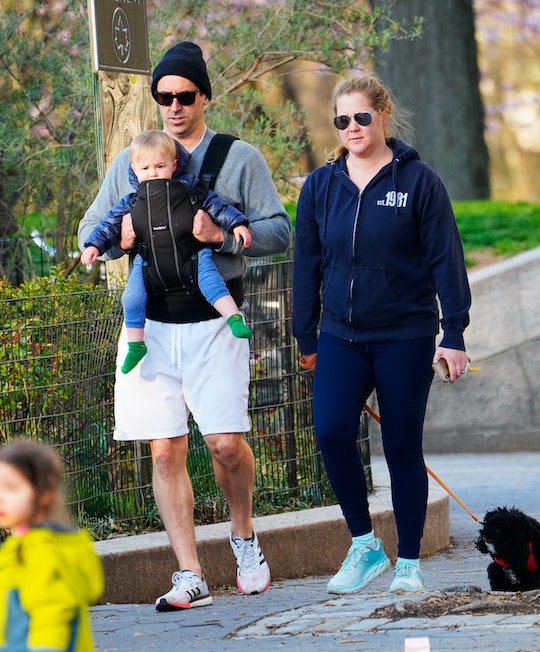 Amy Schumer Shared A Video Of Her Son Saying "Mom" & Yes, It Made Me Emotional

There are a slew of milestones you look forward to as a parent and let's just say, even though he is not your child, Amy Schumer's video of her son Gene saying "mom" will make every mother a little emotional.

Schumer's 17-month-old son Gene is often featured on his mom's Instagram, and it's always a real treat. Especially now that he's moving around and speaking. Little Gene has even made a few cameos on Amy Schumer Learns To Cook, the comedian's Food Network cooking show with her husband, chef Chris Fischer.

In a recent Instagram post, Schumer acknowledged that the "world is burning," but opted to share a sweet moment with her followers. "The world is burning but this was a nice moment," she captioned the video of Gene playing when he turned around to show his mom something from his toy stove and said, "Mom." Everyone clapped, Schumer crawled over to kiss her son, and he looked delighted.

Within this sweet post, Schumer also used the opportunity to remind people to have a plan to vote this November. "Please make a voting plan and make sure everyone in your phone has a voting plan," she wrote on Instagram, directing her followers to supermajority.com to help.

Before sharing this sweet video of Gene saying "Mom," Schumer enlisted her little boy's help to make a video in case she and husband Fischer won an Emmy for Amy Schumer Learns To Cook. Despite their loss, they decided to share the video anyways, "Emmy loss. The vid we made in case we won. We lost to Cheer! I loved cheer!" Schumer, Fischer, and the couple's nanny Jane, who filmed the show during quarantine, all offered preemptive thanks, while Gene steadily ate his way through a bowl of snacks. Sort of fitting for a cooking show.

Amy Schumer is a social media powerhouse, but I think we can all agree Gene is the real star of the show. Especially now that he can say "mom" so darn adorably.