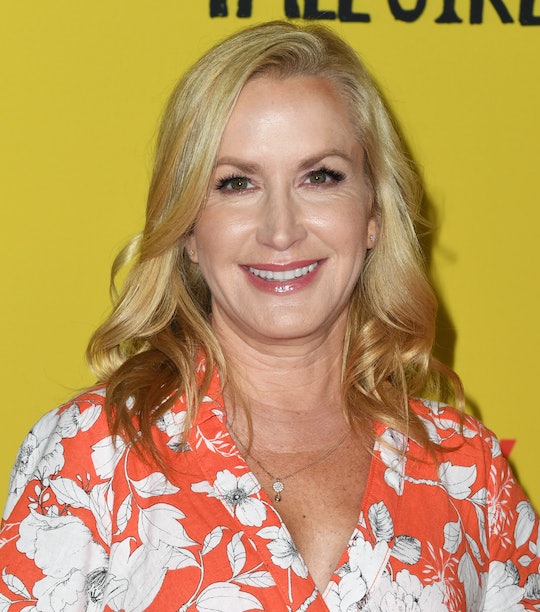 When Kate Flannery was cast on Dancing With the Stars Season 28, fans of The Office rejoiced. In real life, she's nothing like her hot mess counterpart, Meredith, but she still reminds us all why we continue to stream The Office on Netflix at an almost constant rate. And because most of the cast is still close today, you had to expect some of them to show up on DWTS to cheer her on. So when Angela Kinsey was in the DWTS audience, it was basically an Office reunion.

Kinsey and Kate's Office characters weren't besties on the show, but like most of the cast, they have remained close since The Office series finale aired in 2013. And in August, Kinsey told People she was excited to see her former co-star compete on DWTS.

"Kate Flannery is a phenomenal performer," she said at the time. "She's an amazing singer. She has been touring with Jane Lynch. They do the most amazing Christmas album and they perform it, and Kate dances, and I can't wait."

She added that she told Kate ahead of the season that she wanted to go to a taping of DWTS. She made good on that promise when she popped up at one of the front tables on the DWTS premiere.

Ever since its finale, The Office has been at the center of its own subculture. There are a lot of people who could come up with the perfect Office quote or gif for any given situation and despite the show being off the air for years, it's hard to find someone who hasn't marathon watched it at least a half dozen times since it ended.

Because of this, fans have also kept up with its stars, mostly because they are still to close themselves. Kinsey and Jenna Fischer, who played Pam, are often spotted together and on each other's social media posts. In fact, the two women are launching their own Office-themed podcast. There's no word yet on if Kate will make an appearance, but it seems like most of the women from The Office are even closer in real life than they were on the show.

I'm not sure if Kinsey will be back this season to support her friend as a member of the audience again, but it says a lot that she was there for her on opening night. For most of these DWTS celebrities, performing on the live show can be a lot to take in. Clearly, Kate already has experience performing in front of live audiences, but Kinsey was still all about supporting her friend.

Ahead of the DWTS premiere Monday night, Kinsey posted a throwback photo of herself with Kate from their early days on The Office and was already cheering her on. "She is good people as my Mom says," Kinsey wrote about Kate in the caption. "I can’t wait to support her tonight on @dancingabc!! See you soon Kate! You are going to do awesome! So proud of you!"

It's still too early in the season to say how far Kate makes it or if she will be the unfortunate week two elimination. She was paired with DWTS newcomer Pasha Pashkov and they received a combined score of 15 out of 30, so they aren't off to a great start. But I'm sure having a friend like Kinsey in the audience at least helped Kate feel more at ease in an intimidating atmosphere.

I still have hope that Kate can make it far this season, if only so other former Office stars can pop up in the audience to cheer her on and give viewers serious nostalgia for the beloved workplace comedy.