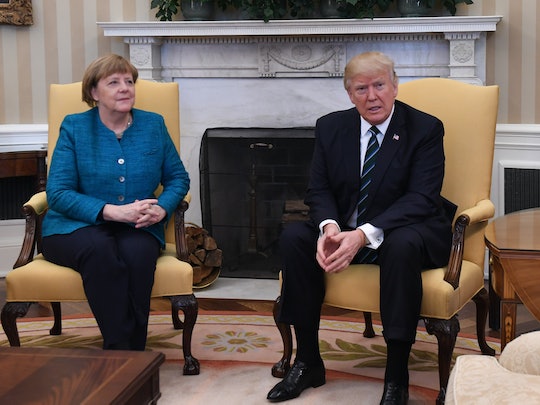 President Donald Trump has done it again: he's blessed the world with yet another awkward handshake moment, which means we get to spend our Friday afternoons laughing at the very best Angela Merkel handshake memes the internet has provided. Who said Trump wasn't making America — or at least the internet — great again?

On Friday, German Chancellor Angela Merkel and Trump sat in the Oval Office surrounded by photographers, when one photographer suggested that the two politicians shake hands — a fairly regular White House photo opportunity for the media. Merkel leaned towards Trump and, when he didn't lean in for a handshake, said, "Do you want to have a handshake?"

He didn't answer. And yes, it was just as cringe-y as it sounds.

To be fair, Trump has had plenty of odd handshake moments before: President Barack Obama and Trump both looked visibly uncomfortable to be shaking hands in the Oval Office after Trump's election, while Canadian Prime Minister Justin Trudeau sabotaged Trump's usual aggressive handshake move a while back. Japanese Prime Minister Shinzo Abe was awkwardly subjected to a 19-second long hand clasp in February.

Clearly, Merkel is not the first person to be on the receiving end of a strange handshake moment with Trump. However, this has to be the first time Trump has simply ignored an Oval Office handshake altogether, and people noticed. It was the not-handshake that launched a thousand memes:

Who knows? Maybe Trump didn't hear the photographer repeatedly calling for a handshake or Merkel's question. Earlier in the day, the two did shake hands outside of the White House, so perhaps he simply thought that portion of Merkel's diplomatic visit was over. But the moment immediately made Americans reminisce about friendly Obama-Merkel press conferences and wonder how the interaction would have been different if Hillary Clinton had been voted in.

The lack of handshake wasn't the only awkward moment between Merkel and Trump. According to The Guardian, Trump was also the recipient of a look of disbelief from the German chancellor when he told Merkel that they had "something in common perhaps" when it came to allegedly being wiretapped by Obama's administration.

Online, people also loved one of Merkel's answer to the press, in which she said, "It’s always better to talk to one another than about one another." Many interpreted the line as a sly dig at Trump's tweeting ways. Either way, the Merkel-Trump visit was a glorious moment for all meme-makers online. Here's to awkward diplomacy!