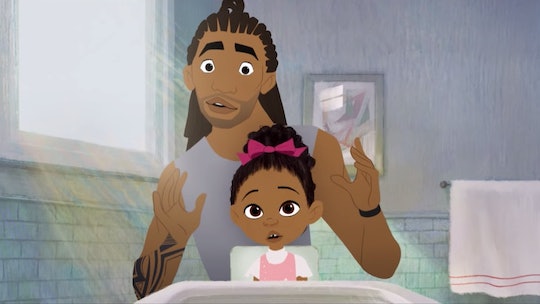 After taking home an award at the 2020 Oscars, Matthew Cherry's heartwarming short Hair Love is becoming an animated series on HBO Max. Based on the short about a Black dad learning how to do his young daughter's hair for the first time, the upcoming series will follow the family even further as they navigate very real issues like multi-generational dynamics, career and marriage struggles, and social challenges.

The new HBO Max series, entitled Young Love, is based on the original characters from Hair Love called the Young family — millennial parents Stephen and Angela, their little girl Zuri, and even her pet cat Rocky.

"I am beyond excited to continue telling the story of Stephen, Angela and Zuri and further explore the family dynamics of a young Black millennial family we established in our short film Hair Love as an animated series," Cherry said in a statement. "Couldn’t ask for better partners in Sony Pictures Animation and HBO Max in helping us get Young Love out to the world."

According to WarnerMedia, HBO Max has ordered 12 episodes of Young Love, though a release date has not been announced yet.

Cherry's journey with Hair Love has been an interesting one. The film first came into being after he initiated a Kickstarter campaign in 2017 to create the 5-minute video short after "seeing a lack of representation in mainstream animated projects, and also wanting to promote hair love amongst young men and women of color."

Since then, Hair Love has gone on to critical acclaim and a massive fan base around the world, as well as a bestselling children's book of the same name. The sweet story of a Black dad who suddenly finds himself learning how to do his daughter's hair when her mom (who was voiced by Issa Rae in the short film) is away has captivated fans by tapping into the love between a father and his daughter.

While there has not been an announcement about the cast at this point, Cherry took to Twitter on Tuesday to announce that they are looking for some voice talent. "Dear Black voice over actors... #YoungLove, a new animated series which is based on the characters from our Oscar-winning animated short film #HairLove, is now open for business at @hbomax," he tweeted.

The announcement of this new animated series comes at a time when Hollywood seems to be answering the call for more diversity and more representation of Black stories in movies and TV shows. Young Love's tribute to a millennial Black family making their way together promises to fill a void that has long existed in media and deliver a series the world has long needed.