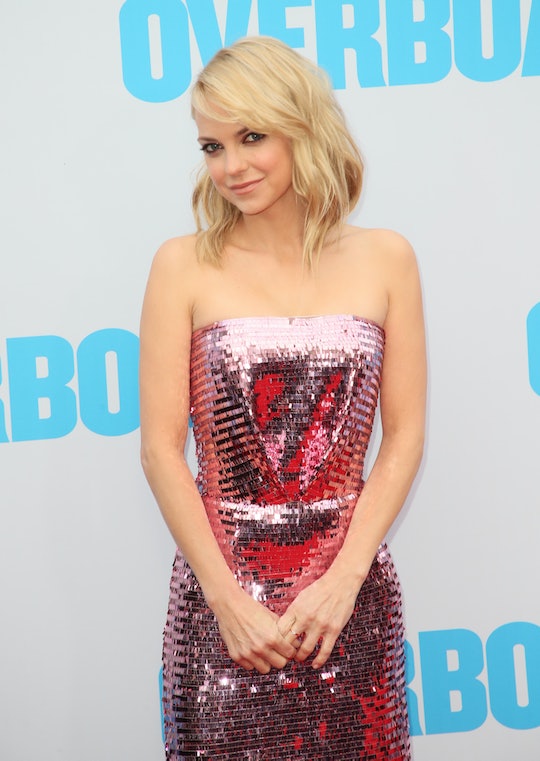 We've all been there: You go somewhere with your kids and they dart directly into danger, forcing you to sprint off after them. It's something every mom has experienced, or will experience, at some point. And that's probably why Anna Faris chasing her son in this hilarious video is so painfully relatable to moms everywhere, even among other fellow celebrities.

The Scary Movie star shared a glimpse into motherhood on Sunday, posting a video of her fearfully chasing after her 6-year-old son Jack, whom she shares with her ex-husband Chris Pratt, as he sprints toward a large pile of sand. Before she can catch him, he jumps from the highest point. In the video, Faris can be heard shouting, "Don't!" just before Jack takes his daring dive into the unknown below.

Perhaps the best part of the video, aside from how relatable it is, are the reactions to it from other moms. Indeed, the comment section is full of hilarious takes on the frightening, but laughable, moment from celebrity mothers and regular people alike.

"Every mother when there [sic] child does something dangerous," one Instagram user commented, while another added, "kids=near hourly heart attacks." Another said, "Heart stopping moment! Look at little ones [sic] face, he loves it, AND looks to be going back around. Sorry Anna, never a dull moment with our kids."

Whitney Cummings also weighed in on the video, noting that Faris appeared to be looking "up to God" for an answer after her son defies her wishes and makes the leap. "I love that you look up to God at the end like WTF," Cummings commented on the video.

Faris often gives fans a glimpse into life with her little dare devil. In September, she posted a clip of Jack doing a "stuntman" roll down a grassy hill, joking that she sees a daring career in his future. In the clip, Faris can be heard asking her son, "Did you hurt yourself?" to which he replies, "Yes! On grass." It appears, however, that his injuries were minor. At the end, Jack can be seen standing tall at the bottom of the hill, making his way back toward his mom. Faris laughs off the incident, because sometimes as a mom that's really all you can do.

"Jack is a future stuntman! And I'm clearly excellent with a camera," she joked in the Instagram post.

Although Faris' approach to motherhood is often to joke about the madness of it all, she keeps it 100 percent real all the time about how difficult it can be. In a 2016 interview with HuffPost, for instance, she acknowledged that "everything that everyone says is true," in regards to becoming a parent, adding:

People really need to pound the information into you because it's a tidal wave change into your life. Especially as a woman, your identity changes. You are now a mom, sort of the most important job in the world, and the pressure and the guilt and all the things that are sort of wrapped up in t hat, I don't think anyone can prepare your for.

Faris has also discussed the more frightening parts of parenting, specifically her son's premature birth. In 2015, Faris reflected on Jack's scary early arrival into the world, revealing to Redbook that he was born at about seven months gestation. She shared with the magazine that her "water broke in the middle of the night at seven months," and she and Pratt "rushed to the hospital and they were able to halt active labor with magnesium." But, as Faris told Redbook, she had to sit on bedrest for the next four weeks; she went into labor again a week later and Jack was born.

"Chris and I were so scared, but then Jack came out and, even though he was so tiny, he looked so good to us," she told Redbook, adding that Jack spent a month in a neonatal intensive care unit (NICU) before he could go home with her and Pratt.

Fans have come to appreciate Faris' honest take on parenting. While most celebrities post only the highlights, the comedic actress opts for realness — even when it's a little frightening, like this new video of Jack's sand pile jump.

While she does get mom-shamed from time to time, the majority of the comments on her pictures and videos are positive reactions from fans and friends. There's no perfect parent, but Faris is pretty much nailing this whole motherhood thing and I love seeing it on Instagram when she decides to share.