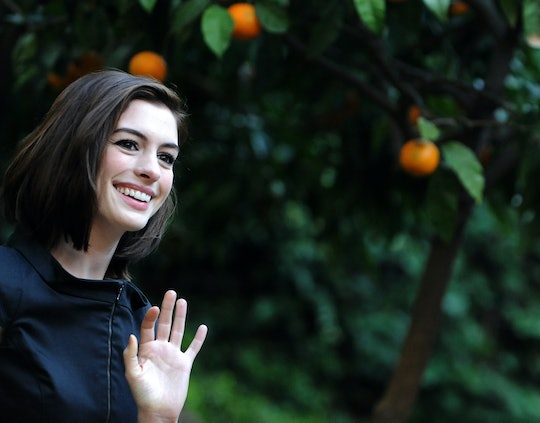 Roald Dahl and spooky movie fans alike might be surprised to find out that Anne Hathaway was pregnant while filming The Witches, which is currently streaming on HBO Max.

This little factoid is not only just fun to know, but it's also pretty ironic, considering that Hathaway's character in The Witches absolutely despises kids. Hathaway plays the Grand High Witch in the film, whose ultimate and incredibly villainous goal is to turn kids into mice and have them exterminated. It's a brutal and scary role that's quite the opposite from the loving and adoring mother that Hathaway is in real life. She and her husband, Adam Schulman, have two kids, their 4-year-old son Jonathan and 11-month-old son Jack, who she told Seacrest and Ripa get along great.

"Now Jack is big enough to wrestle with, and that's brought a new element to their relationship," she said. "It's really cute."

While Hathaway was able to pull off her performance in the film without a hitch, she told the Seacrest and Ripa that her pregnancy only caused a minor issue on set. The actress said that the movie's costume designer wanted Hathaway's character to have a "really tight waist" but with her pregnant belly, she knew that couldn't happen. "I was like, 'Mmm, no. No, I don't think so. No,'" she said. "And she was like, 'Well, why?' And I was like, 'Eh, you know, I just know myself.' I'm scrambling for a reason."

Although Jack might have been with Hathaway while she was filming The Witches, during an appearance on TODAY on Monday Hathaway said that it will be a while before he actually gets to see the film. "My children will not be seeing this movie until they are 30," she joked, "and maybe not even then."