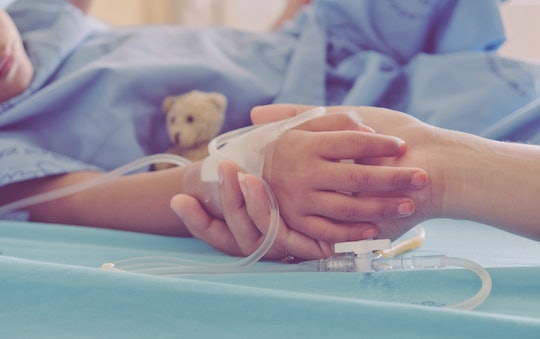 The ongoing arguments over the rights of transgender children continue with the latest attempts by Republican lawmakers to restrict medical care for transgender youths. In South Dakota, an anti-transgender law looking to criminalize medical treatments for minors could be passed, and it's far from the only anti-trans bill to be introduced this year.

Also called the "Vulnerable Child Act," House Bill 1057 was brought to the South Dakota House of Representatives on Tuesday by Republican state Rep. Fred Deutsch. This bill, which The Hill reports has apparently been fast-tracked to be considered on Friday, would see medical professionals charged with a Class 4 felony if they perform gender-affirmation surgery or provide hormone replacement therapy to minors. The bill was apparently introduced by Deutsch as a way to prohibit doctors from “attempting to change or affirm the minor's perception of the minor's sex," according to the text from HB 1057, and would include emancipated minors under the age of 18 as well as any minors who are living on their own. While the bill does allow for the exception of minors born with a “medically-verifiable genetic disorder of sex development," it would criminalize any other aide from doctors and medical professionals who are trying to help transgender minors with gender-affirmation surgery or hormone replacement therapy. If the bill is passed in a vote at the South Dakota House of Representatives, it would need the approval of Republican Governor Kristi Noem before becoming a law.

Romper reached out to Gov. Noem's office for comment and is waiting for a reply.

The bill has received support from right-wing Christian groups who claim it was written as an effort to protect the rights of children, but mental health professional Anne Dilenschneider of Sioux Falls, South Dakota told The Daily Beast that the "fear mongering" behind the bill does not acknowledge all of the safety measures doctors and other medical staff must follow before aiding a transgender minor. A full 120-page Standards of Care manual created by the World Professional Association for Transgender Health that covers the mental and physical needs of all gender non-conforming, transsexual, and transgender people. As Dilenschneider explained to the Daily Beast, the issue of right wing legislators spreading misinformation is a battle that must be won for young members of the transgender community:

Every year we know [anti-trans bills being introduced] is coming up. We all need to remember what is actually happening day in and day out—how much good, evidence-based care is going on, and how many lives are being saved.

South Dakota is unfortunately not the only state to start off 2020 with proposed legislation attempting to limit medical intervention for transgender minors. As of Friday, NBC News reports that Republican lawmakers in seven states have introduced similar bills. The Vulnerable Child Act would see medical practitioners potentially hit with a $15,000 fine and facing up to 15 years in prison if they provide trans health care to minors.

Anyone interested in speaking out against this bill needs to contact their representative and make sure their voices are heard, because the voices of those supporting the bill are most certainly being heard. They cannot be the only ones.

More Like This
Doctors Swallowed LEGOS To Prove Everything Is Awesome For Kids Who Do The Same
Does The FDA's Plan To Limit Lead In Baby Food Go Far Enough?
Michigan Right-Wing Group Wants To Erase LGBTQ+ Sex Ed
Barbie Honors Aviator “Queen” Bessie Coleman In Their Inspiring Women Line
What Parents Are Talking About — Delivered Straight To Your Inbox