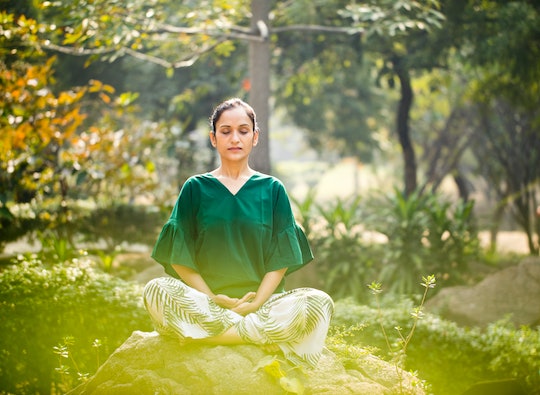 Aquarians Will Make Major Progress in 2020, But It Won't Come Easy

As you leave 2019 behind and look forward to the new decade, you're likely wondering what you can expect from the year ahead. For anyone born between January 20 and February 18, your Aquarius 2020 horoscope promises personal growth and big rewards, but there might be some struggle along the way. Take comfort, though, because by the end of the year, you will transform into a new, healthier version of yourself, inside and out.

"This year will be your time to get into the best inner and outer shape that your body asks," professional astrologer Rebecca Gordon tells Romper.

A solar eclipse around January 10 in your house of physical health means you'll "start the year out by ending a longstanding physical habit or routine [that] you have been engaged in for some time." Whatever this change is, you can "consider [it] the start to a complete cleansing year to focus on ideal health and finding your true joy," says Gordon.

Despite the motivation this initial success will likely bring you, be prepared to lose momentum shortly after. Astrologer and author Steven Forrest tells Romper that "things might seem a little muddled in your life" for the first half of the year. And since "Aquarians are visionaries," according to astrologer and spiritual adviser, Philip Young, Ph.D., this confusion and uncertainty could be particularly tough for you. Whatever you're envisioning or hoping to happen right now may not be attainable until later in the year, he tells Romper.

As you get into the middle of February and early March, this frustrating confusion will persist. Astrology.com cautioned you to expect "less optimistic days [that] will lessen your capacity to discern and the will to act" during this time. Even though it might be discouraging and difficult to keep working on and pursuing your big visions for the year, "your inner peace and calmness will get you through."

Mid-year, around July, Saturn will enter your sign. "This transit will actually help ground idealistic visions into realistic possibilities," says Young. So all of those goals you couldn't get off the ground at the start of the year will finally start to take shape. Young also says that from July on, "whatever [you envision] regarding work, family, and relationships will be more attainable."

Even though you will finally start to see your big visions come to life in July, make sure you're not overworking yourself to make up for lost time. Astrology.com explained that between June and August, you will need to put aside time to focus on self-care and caring for the people you love. By doing this, you will find that you are more "grounded and centered," which will allow you to be "more present" in managing life's dramatic highs and lows. This will also make you a better ally for your loved ones while they try to do the same.

As the second half of the year rolls on, you'll also see major progress in terms of self-improvement. Throughout the year, Gordon says one of your primary focuses will be "on your spiritual, emotional, and physical well-being" and "kicking old mental habits and patterns to the curb and releasing all that is not helping you move forward."

In terms of career, Pluto in conservative Capricorn could inspire you to look for a more stable position, according to Refinery 29; or, "if you're already established at work, this could be a fantastic opportunity to take up a leadership role or help a startup shape up their infrastructure." And as far as romance goes, "single or attached, you may be caught by surprise around June 21 when your love ruler, the Sun, enters his first eclipse in deep-feeling Cancer," the site continued. Meanwhile, when Venus goes retrograde in Gemini from May 13 to June 25, you might notice some "little hiccups" on the domestic front (arguments over chores with your partner, perhaps?).

Before you know it, you'll be approaching the end of 2020. In December, Forrest says you can expect "doors [to] open" for brighter possibilities and further improvement. He also says those doors will remain open for a full year. Even though you might have a tough time getting the ball rolling during at the start of the new decade, rest assured you will come out on top. Yearly-Horoscope.com promised 2020 to be a "lucky year, a year of changes for the better [where] you will find peace, harmony, and happiness."

Rebecca Gordon, NYC-based astrologer and founder of the Astrology School

More Like This
What Is RSV?
Can Elderberry Help Prevent Illness In Kids? Doctors Weigh In
Endometriosis & Your Sex Life
How Much Hair Loss Is Normal? 9 Signs You’re Losing Too Much Hair