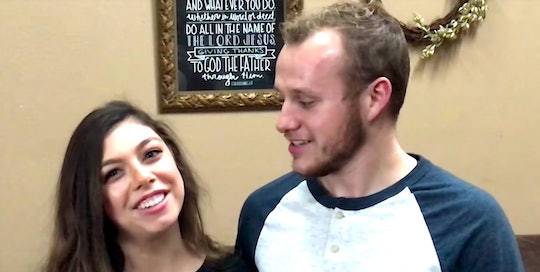 The Duggar Baby Boom Of 2018 Is Over, But Could That Change Soon?

If anyone knows anything about the Duggar family, it is that there are always babies around. The supersized family of 19 sons and daughters, some of whom star on TLC's Counting On, grows each and every year. And because there are so many Duggars who are married, courting, or engaged to keep up with nowadays, it's fair to wonder: Are any Duggars pregnant right now?

In the past year alone, three babies have been born into the Duggar family. On Feb 23., Joy-Anna Duggar and her husband, Austin Forsyth, welcomed their first child, a son named Gideon, according to E! News. Then, on June 8, Joseph Duggar and his wife, Kendra, welcomed their son, Garrett, according to E! News. Finally, Jinger Duggar gave birth to her first child, Felicity Nicole, with her husband, Jeremy Vuolo, in mid-July. Needless to say, it's been a busy year for Duggar moms.

Although it's only August, it seems unlikely that the family will grow much more right now. In fact, there are currently no Duggars who are pregnant, according to In Touch Weekly — at least, not to the knowledge of the public.

But just because no one is pregnant right now, that doesn't mean that there won't be any pregnancies or baby news announced in the near future. Who might that be? Here's a list of Duggars who you can possibly "count on" adding to their families.

Josiah and Lauren are the only married Duggar couple to not have kids — but all of that could change very shortly. The couple just got married on June 30, according to People, and have said that they are "overjoyed" to start this new chapter of their lives. After celebrating their marriage and their honeymoon in Austria, fans are definitely wondering if a pregnancy announcement will be on the way, according to In Touch Weekly. But nothing has been confirmed from the couple yet.

If the Duggars are known for their fast courtships and engagements, then they are known for announcing pregnancies just as quickly. For instance, Jessa Duggar and her husband, Ben Seewald, had a five-month period between their November wedding and announcing that they were expecting their first child in April 2015, according to People. Jill Duggar and her husband, Derick Dillard, announced that they were expecting just 61 days after saying "I do," according to E! News.

The outlier of all of these siblings is Jinger Duggar, who got married in November 2016, according to People, but didn't announce she was expecting her first child until January of this year — waiting almost one year to do so.

Because the Duggars waste no time in building their broods after tying the knot, it is safe to think that Josiah and Lauren could also announce some exciting news soon. But, because it's been a hot minute since they got married, let's not get on bump watch just yet, OK?

Jessa is the mom to two young sons under the age of 3, according to Us Weekly — Spurgeon and Henry — but that doesn't mean that she isn't already thinking about expanding her family.

Earlier this year, rumors spread that Jessa was pregnant with her third child after she appeared alongside her then-pregnant sister, Jinger, talking about "comparing" their pregnancies, according to In Touch Weekly. This led fans to believe that she was talking about actively comparing their pregnancies. But Jessa quickly shut down those rumors on Instagram, explaining that any "bump" that fans saw was because of her postpartum body.

Though she's not currently expecting, she does indeed want more kids in the future. In an interview with Us Weekly in July, Jessa said she was absolutely ready:

I definitely have baby fever. We would be overjoyed if we were to find out we were expecting again. It would be sweet to have a baby girl. We'd probably have to start again from ground zero if we had a girl thrown into the mix!

Jill is also the mom to two young sons — Israel and Samuel — but it's certainly possible that she could add more to her family somewhere down the line. In fact, pregnancy rumors have already started, according to In Touch Weekly, after Duggar posted a photo with gummy candy in her hand, which somehow led people to think that she was revealing a pregnancy craving? Not the most convincing of clues, but clearly fans are eager.

Although Jill herself has not announced that she is pregnant or any plans to do so in the near future, it isn't entirely out of the question. With her husband starting law school and the family settling down their roots in Arkansas, they seem pretty cozy where they are.

So John-David Duggar and his fiancé, Abbie Grace Burnett, haven't gotten married yet, but that doesn't mean babies aren't on their minds. After announcing their courtship in June, the couple got engaged one month later in late July, according to People.

Although their wedding date has not yet been announced, it's clear this is one couple that clearly wastes no time.

Although the Duggar family does not subscribe to a certain timeline and the remaining married couples could certainly add to their broods, you have to give these women a minute to enjoy this precious time with their newborns. As previously stated, Joy-Anna, Kendra, and Jinger all gave birth to their first children this year. And Anna Duggar, who is married to the oldest Duggar, Josh, also recently gave birth to her fifth child last year in September, according to Us Weekly.

While anything is possible, if you're taking bets, it's probably safe to count on these women out of the running.

Again, no — I repeat — no Duggars are currently pregnant. But with all this said, it's fun to follow along on each of their journeys and no matter what that entails, hopefully they'll continue to share their exciting life milestones with their devoted fans. Weddings, courtships, babies, pregnancies — it's all exciting in my book.