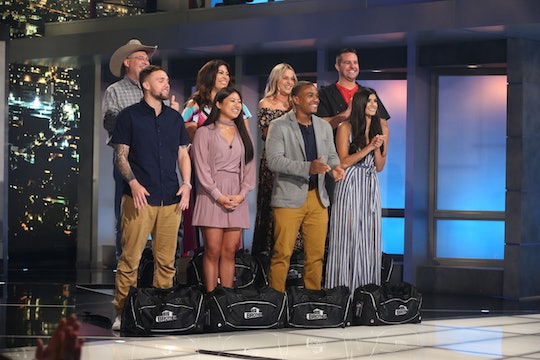 One of the best things about any Big Brother season is the twists. Like most fans, I look forward to the moments where host Julie Chen Moonves utters those two magic words — "but first" — and drops a new twist on the houseguests. They were alredy given a big twist in the form of electing a camp counselor, but another big shocker could be if there are any veterans joining Big Brother 21.

So far, there haven’t been any announcements about returning vets to shake things up like they have in recent seasons, but it’s still pretty early in the game and there is plenty of time for Big Brother to bring in veteran players to get another chance at winning $500,000. Or, some fans have speculated, Big Brother vets might come back with more important roles. One fan on Twitter took a poll to ask other fans if they thought returning players would come back as camp counselors to go with the season’s theme of Camp Big Brother and guide the new players.

This would mean that they probably wouldn't be given a shot at the grand prize, but it would give longtime Big Brother fans the chance to see some of their favorites back in action. Right now, CBS hasn't announced that any vets will be back or even if there will be camp counselors brought in, but I think it’s a solid idea that would make for a surprising twist. Enough fans have hopped aboard this theory train so much that at this point, it would be shocking if it doesn't turn out to be true.

Another Big Brother fan on Twitter theorized that at least four vets will return as camp counselors to battle it out and see which of them will take the place of a recently evicted houseguest from the cast of newbies. Given Big Brother’s penchant for Battle Back competitions and, of course, twists, this could happen in the next couple of weeks.

As one fan pointed out on Reddit, there are three fake deer heads mounted on the wall inside the Big Brother house. This could just be a coincidence to go with the ambiance of Camp Big Brother. Or, it could be meant to give the houseguests a clue that soon, there will be three more players added to the game. Back in Season 18, when the theme was travel, returning vets came back to the house hidden as "stowaways" in a stack of suitcases and luggage trunks that was made to look like a decoration. So going by that alone, the Redditor may be on to something.

Big Brother executive producers Allison Grodner and Rich Meehan said in a press release that this season will feature "an unexpected twist that will rock the house, forcing the houseguests to rethink how they play the game." That could be in reference to the first twist of the season, which forced guests to campaign for votes for the role of camp director. As fans saw in the first part of the season premiere, Jackson won with the most votes, but will be forced to nominate four people, which will put an immediate target on his back. Then again, the "unexpected twist" could also refer to the return of veteran players who will shake up the game in a major way.

There are typically 16 houseguests each season and fans have already met all of them, but there’s still a chance that the Big Brother powers that be will bring in vets to force some intense double eviction nights this season and really keep everyone on their toes. As a fan, I live for those kinds of twists, so I genuinely hope that’s the case. For the time being, however, since there hasn't been confirmation from CBS, let’s not get our hopes up.