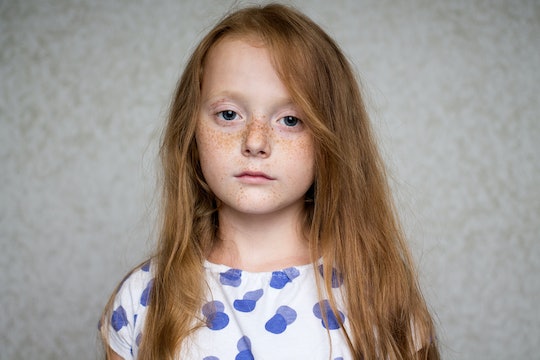 Adorable Freckles Don't Happen At Birth, But Here's Why Your Kid May Develop Them

Freckles seem to be all the rage these days, with makeup companies posting pictures of women applying fake freckles across their noses and cheeks on Instagram. When my husband and I were kids, we got picked on for our natural freckles, but now we’re apparently in fashion. So take that, mean Lainey. With our son due in a little less than two weeks, of course we are wondering what he’ll look like. I’m sure he’ll have dark hair and eyes like my husband and I, but will he have freckles all over like we do? Are babies born with freckles or will this be something to look forward to as he gets older?

According to Dr. Tien Nguyen, a dermatologist at MemorialCare Orange Coast Medical Center in Fountain Valley, California, the “freckles” you may see on a newborn aren’t what we would technically call freckles, and they’re a bit more concerning. “Freckles that you find in newborns may be part of a congenital nevus [birthmark], or signs of other congenital anomalies [birth defects]. They do look similar, but the clinical implication and significance of their presence at birth or in non-sun exposed areas should be addressed," he tells Romper. And if you do notice these “freckles,” you should have your newborn checked out by a dermatologist, according to Nguyen.

So turns out, your baby won't be born with a smattering of freckles like so many thought was the case with Khloé Kardashian's baby. When Kardashian posted the first picture of her daughter True Thompson recently, fans couldn't figure out if the freckles were part of the video's filter, or if they were actually on the newborn's face. Turns out, freckles are so popular, they end up on filters now.

But what are freckles, exactly? Nguyen says they’re “small localized areas of hyperpigmented skin that appear darker than the normal surrounding skin.” Dr. S. Daniel Ganjian, a pediatrician at Providence Saint John’s Health Center in Santa Monica, California, adds, “Freckles develop after repeated sunlight exposure in people who are genetically predisposed to freckling. Such individuals have more sensitive skin, causing their melanocytes to be hyperactive.” For the record, melanocytes are pigment-producing cells, according to the online medical dictionary. And pigment is color. Another reason babies can’t be born with freckles as you and I know them to be, is the melanocytes aren’t mature enough at birth, according to Ganjian. He says they’ll mature when they’re between 2 and 4 years old, “which is the time you start seeing freckles.”

Is there such a thing as too many freckles? Are you at a higher risk of developing skin cancer if you do have them? “Freckles themselves are not dangerous, but freckling in general is a sign of skin sensitivity to UV radiation. When you start seeing freckling develop, that means your child is getting exposed to too much sunlight,” Ganjian explains. Nguyen adds, “The presence of freckles is pointing to a history of sun exposure, so a skin cancer screening looking for potential skin cancer is recommended.” To prevent freckling, Ganjian suggests using “physical sunblocks,” like shades, hats, and clothing — perhaps UPF clothing — or “zinc oxide sunblocks with SPF of 30.”

I remember every summer, I’d always get a ton of freckles on my forehead, nose, and the tops of my knees. I’d never tan of course, just burn and/or freckle. The same thing happens to me now, and I also have permanent freckling on my arms, but not so much on my face anymore the older I get. If you notice your kid starting to freckle up like I did, maybe check in with their pediatrician and go over some ways to give them more sun protection. Because while freckles are cute on kids and apparently in style right now, skin cancer is not, am I right? But if your newborn is born with “freckles” make sure you make an appointment to get them checked out, just in case. It’s probably nothing, but it’s always better to be safe than sorry.