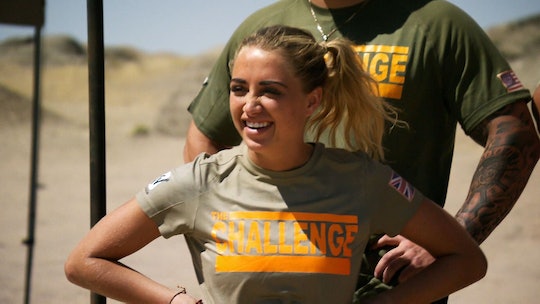 Georgia and Bear have made their mark on The Challenge: War of the Worlds. They might not be an official couple, but they have gotten into some heavy cuddle and kissing sessions, so for all intents and purposes, they are this season’s big showmance. The only problem is that when this season filmed, Bear likely had a girlfriend back home. So if he broke things off with her, you have to wonder if Bear and Georgia are together after The Challenge. She seems totally smitten with him on the show, but it wasn't too long ago that he tried to flirt with Nany while Georgia was in the other room, so I’m not sure if Georgia and Bear were ever destined to have a fairytale romance.

It’s not clear if they dated after they got home from filming The Challenge, but there were rumors that Bear left his girlfriend for Georgia and that he and Georgia saw each other for a short time. Since neither of them have confirmed as much, that’s mostly speculation right now. But there are a couple of tweets that make it seem like Georgia and Bear had something going on outside of the show which quickly ended after filming. In a December tweet that Georgia has since deleted, she said, "A leopard never changes its spots."

Shortly after, Bear tweeted, likely in response to Georgia, "Landed back in the UK and Living the dream. They say a Leopard doesn’t change it’s spots... lucky I'm a Bear." So if they were together after The Challenge, it’s safe to say that they didn't last very long.

If I had to guess why Bear and Georgia didn't fare well outside of The Challenge, I would say that it had something to do with Bear’s permanent wandering eye. He proved who he is during filming this season when he got closer to Georgia with a girlfriend back home and then tried to flirt with other women in the house while cuddling with Georgia every night.

When Bear competed on Celebrity Big Brother UK 18, he reportedly hooked up with fellow houseguest Chloe Khan even though he had a girlfriend back home at the time. He was also on Ex On The Beach twice. It seems like any chance Bear has to find romance and hookup with women on TV, he will take it. There is the off chance that Bear and Georgia dated after The Challenge and split amicably, but those tweets definitely make it seem like there was something bigger that happened between them.

This season hasn't been easy on Georgia as she has defended Bear countless times and put her own team on the line to support him and try and keep him safe. On a show like The Challenge, you can make a lot of enemies by aligning yourself with the wrong person and since Bear is basically on almost everyone’s list, Georgia has risked a lot by being there for him. And unfortunately, it doesn't seem like it was worth it for her.

Right now, judging by their respective Instagram accounts, it doesn't look like they are dating. In fact, they don't even follow each other on Instagram anymore. I suspect that all of their dirty laundry will be aired after this season on The Challenge reunion special, but it looks like Georgia and Bear are done. I could see The Challenge producers bringing them together again onscreen in a future season just to mess with them and kick up some more drama, which I honestly wouldn't hate, but right now, they seem happier apart.