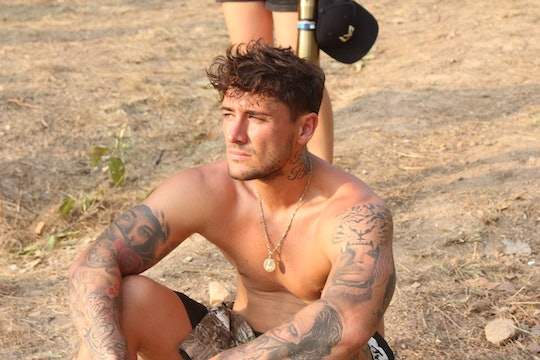 Bear & Laurel Are Basically Star-Crossed Lovers On 'The Challenge'

When Laurel decided to make her triumphant return to The Challenge, she probably didn't expect to be embroiled in a secret showmance from the jump. But right now, she and Bear seem to be getting along better than two players from opposite teams probably should. It’s unclear how far their relationship will go this season, but they have definitely piqued fans' interest. I can't say for sure if Bear and Laurel are dating after The Challenge, but as it stands on the show, they are definitely into each other. And as far as relationships that last beyond the show go, it could totally happen.

The two players who are on the US and UK teams respectively took a liking to each other in the Season 34 premiere. Bear was immediately attracted to The Challenge vet even though the woman he was into last season, Georgia, is also a contestant this time around. But Bear has never had much shame, so it didn't come as a surprise when he openly flirted with Laurel. And, because behind Bear’s egocentric tendencies and loud mouth lays a charming personality, Laurel was wooed.

It wouldn't be out of the question for them to have pursued each other outside of the show when they finished filming.

Before War of the Worlds 2 began filming, Bear spoke with Ode on YouTube about romance and said he was open to a new relationship following the disastrous ending he had with Georgia and the girlfriend he failed to mention he had back home last season.

"I want a girlfriend, I want kids, I want to hold someone’s hand in the Caribbean, on the beach… But I need to find that person," he said at the time. He then admitted that most of what he does is for attention and he does get in trouble with having multiple partners half the time. So while I would love to see another successful couple come out of The Challenge, Bear and Laurel might be better off as a season-long fling.

Neither of their respective Instagrams give anything away to suggest they are dating outside of the show. In a sneak peak from Wednesday’s episode which was posted on The Challenge Twitter account, Laurel and Bear do seem to get closer physically. It doesn't necessarily mean they are together now after the season has finished filming. However, it does mean fans probably haven’t seen the last of them together this season.

The biggest downside to their showmance is that this could massively blow up in both of their faces. If word gets out that Laurel and Bear have a *thing*, the US and UK teams will both likely have a problem with it. This season is about one team actively battling against another team. Bear and Laurel are on opposite sides of the fence. If their teammates catch wind of what’s going on between them, it could be bad for them both.

In the past, some couples who met on The Challenge have gone on to find happiness and stability outside of the show. Paulie and Cara Maria are still going strong and this is their third season in a row competing together. Jordan and Tori, who recently got engaged, are another Challenge success story.

It’s totally possible for Bear and Laurel to make it work outside of the show if they both wanted to. I just think their romance is one better left on The Challenge when they both leave, and from the looks of it so far, they feel the same way.