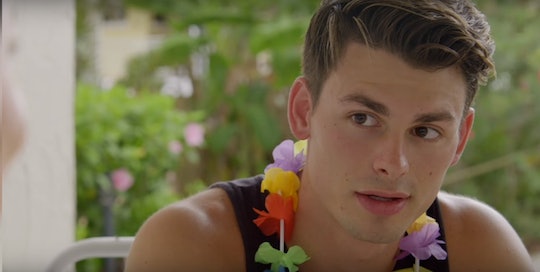 Cara & Garrett On 'Siesta Key' Might Be A Thing, So Alex Can Finally Back Off

Everyone knew that Cara’s arrival on Siesta Key would result in drama. Alex already had his hands full with his other exes on the show and Cara added to that. Luckily, she doesn't seem to have any interest in rekindling their romance and instead, she seems to have set her sights on Garrett and vice versa. But since Season 2 is finished filming, fans might be wondering if Cara and Garrett are dating now. The potential Siesta Key couple could be the best thing to happen to the show since Madisson rejected Brandon after he serenaded her in an attempt to win her back.

It didn't take long for Garrett to come sniffing around Cara soon after she arrived in town and began to blend in with Alex’s inner circle. Despite some people (ahem, Juliette) thinking that Cara was in town to steal Alex back, she said she had no interest in her former boyfriend. "I always saw through his bullsh-t," Cara said on Siesta Key. "The Alex Kompo that I know — once a dog, always a dog. Like, that kid's never going to change." She also called him a "scary dude to date," so it’s safe to say she has no intention of reliving her romance with him.

And it makes sense, then, that Cara and Garrett found their way to each other. It looks like they are together on the show and they could still be dating now that Season 2 has finished filming.

As with most relationships on reality TV, it’s hard to say for certain if Garrett and Cara are still a thing. Possibly in an effort to keep fans guessing, neither have featured the other too much on their respective Instagrams. On the flip side, there haven’t been any hints of other romantic interests for either of them, so it’s possible that they are still dating.

Back in July, Garrett posted a selfie with Cara and the caption, "Sunshine on my mind." The fact that he didn't delete it later on shows that they could still be a thing and they definitely look a little closer than just friends.

There is, however, the possibility that Cara and Garrett have a rocky road ahead of them before they can find common ground as a solid couple on Siesta Key. They started out easily enough, but in a recent episode, Cara responded to Alex’s blatant flirting in a way that got on Garrett’s nerves.

When Alex and Juliette temporarily broke up for the upteenth time, he told Cara to sit next to him and she did, much to Garrett’s annoyance. As he tried to get her to scoot closer to him, Alex said, "You don’t think I’m getting you back?" It was typical Alex to dangle that in front of her because we all know he would love nothing more than to have Juliette and Cara fight over him.

Later, Garrett and Cara talked it out, but there seemed to be an Alex-sized amount of tension lingering between them. And even though he later got back together with Juliette, I'm sure that was Alex's goal.

If I had to judge Cara and Garrett’s relationship outside of Siesta Key based solely on their recent ups and downs, it isn't looking good. But if they could get Alex out from between them and get away from some of that drama, they might be able to make it official. Right now, it's hard to say where they stand, but judging by the way their relationship started and by social media, there’s a good chance that Garrett and Cara aren't totally over.