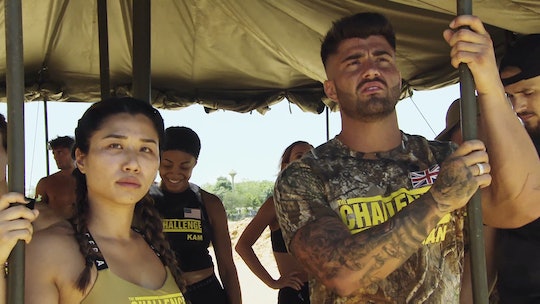 Dee & Rogan Are Keeping Things "Exclusively Casual" On 'The Challenge'

The Challenge isn’t another version of Are You the One? or The Bachelor, but it does sometimes breathe life into new couples in between the competitions. What else is there to do when the players have talked game ad nauseam and they have hours until their next challenge begins? Some couples last well beyond the season and even return to compete together again, while others fizzle out. It’s not clear yet where Dee and Rogan stand, but fans are curious about whether or not Dee and Rogan are together after The Challenge.

They seemed to feel an immediate attraction to each other and hooked up early on this season. They continued to be totally into each other, but without the dramatic strings that some of these showmances bring. Ahem, Bear and Georgia on War of the Worlds last season, I'm looking at you. They both appear to be intent on keeping things casual and whatever they have going on in the show hasn't yet interfered with their team or their individual games.

But as the season progresses, their romance might get in the way and if they do develop actual feelings for each other, Dee and Rogan could find themselves in a post-show relationship whether they want to be or not.

Fans who are shipping Dee and Rogan might need to dial it back a bit, though. Because as far as Instagram is concerned, both Challenge competitors are doing their own things outside of the show. Since filming ended in the spring, neither cast members have shown up on each other’s respective social media profiles and right now, Rogan isn't really in any place to be in a relationship.

Rogan is currently out on tour with the Dreamboys, a UK male strip show, and won't be home until the end of November. His profession as a male stripper has come up more than once so far this season and it may have been part of what gained Dee’s attention in the first place. But because he lives such a busy life, it's unlikely that he has time for any long-term relationships, even if he and Dee hit it off after The Challenge.

Dee and Rogan also live in completely different countries. While she is on the UK team on The Challenge, Dee lives in Australia, while Rogan lives in the UK. She recently replied to a comment on one of her Instagram photos that she’s moving soon, but I doubt it would be for Rogan. They seem like they are having fun on The Challenge right now, and that’s all well and good. I just don't see things getting serious because they are both so lighthearted about whatever it is they have going on between them.

That’s not to say Challenge relationships don't work out, however. Paulie and Cara Maria met on Final Reckoning and after a few hiccups and some cheating drama, they are still together and have each other’s backs on The Challenge. Jordan and Tori are another Challenge couple who lasted beyond their first season together and are even engaged now, outside of the show. It doesn't always work out for couples who fall for each other in the midst of the competition, though. Ashley and Hunter’s relationship came crashing down in Season 32 and last season, Bear and Georgia had a fling which got messy when he revealed he had a girlfriend back home.

While Dee and Rogan could work outside of the show, it just doesn't seem like they intend to make it happen. And if that’s what is best for both of them and their individual games, there’s nothing wrong with it. Let’s just hope they can keep things professional where the game matters, because there’s still close to $1 million on the line.